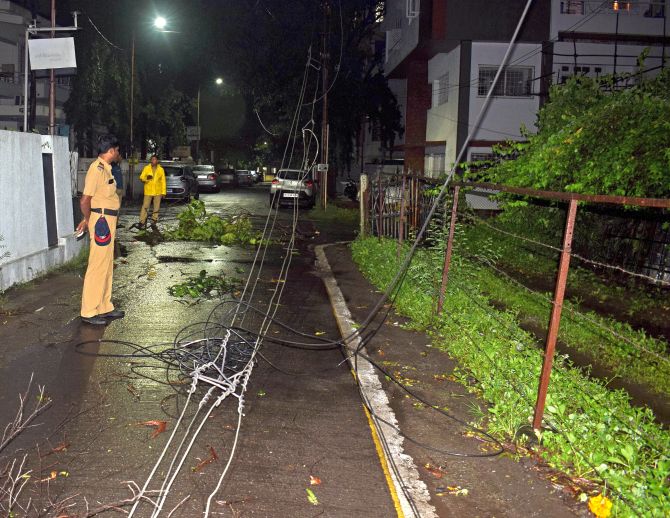 A tree fell on a service van of civic transport service Pune Mahanagar Parivahan Mahamandal Limited, killing the driver, as heavy rains lashed the city on Wednesday evening.
The service van had been sent to the busy Tilak Road to attend to another bus which had broken down, an official said.
As the maintenance and repair staff got down, Vijay Navdhane, the van's driver, parked it under a tree in a bylane, the official said.
As the luck would have it, the tree was uprooted due to the strong winds and crashed onto the van, trapping him inside.
Navdhane was rescued but succumbed to injuries, the official said.
The spell of rain lasted for about an hour.
Water logging led to heavy traffic jams at many places.
Maharashtra Navnirman Sena chief Raj Thackeray's scheduled election rally in the city had to be called off due to the rain. -- PTI
Image: Police personnel check fallen electric wires due to heavy rains in Pune city. Photograph: PTI Photo
« Back to LIVE