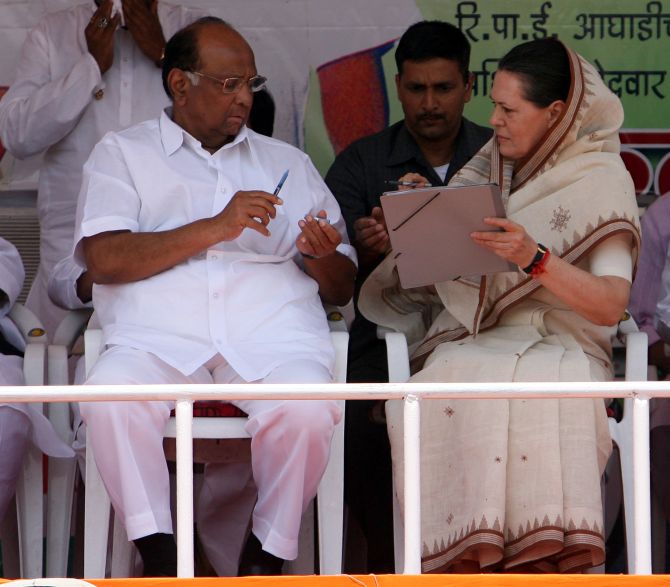 Senior Nationalist Congress Party leader Ajit Pawar on Wednesday downplayed Congress veteran Sushilkumar Shinde's statement which had reignited murmurs about the merger of the Sharad Pawar-led party with the Grand Old Party.
Shinde, who had once termed Sharad Pawar as his political guru, caused a flutter on Tuesday when he said the NCP and the Congress will come together "because now they are also tired and we are also tired".
Speaking on the sidelines of a party event in Pune, Ajit, nephew of Sharad Pawar, dubbed Shinde's remarks as his "personal opinion".
"He (Shinde) is a senior leader of Congress and he had expressed his personal opinion. I heard what he said, and according to me, he had expressed what he thinks, which is his right," said Ajit.
The former Maharashtra deputy chief minister said the Congress and the NCP had fixed their target to win more than 175 seats out of the total 288 constituencies in the October 21 Maharashtra assembly elections.
"I don't want to confuse the party workers of both the NCP and the Congress by making any statement on what he (Shinde) said or thought," he said.
Ajit said the NCP and the Congress work separately but have come together as a part of an alliance against the BJP-NDA.
Shinde's statement about the NCP and the Congress coming together assumed significance given that both the parties are struggling to withstand the BJP blitzkrieg.
Many prominent leaders of Congress and NCP crossed over to the BJP and the Shiv Sena in the run-up to elections, leaving the onerous task of reinvigorating the party rank and file to the Pawar senior. -- PTI
« Back to LIVE