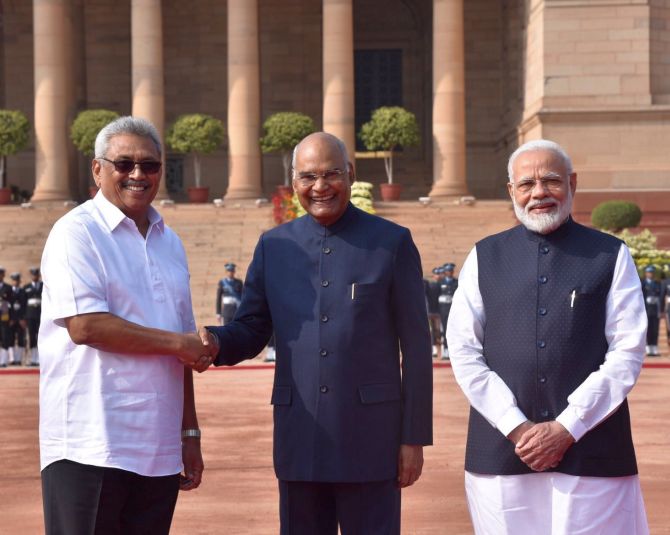 Newly-elected Sri Lankan President Gotabaya Rajapaksa , invited Prime Minister Narendra Modi on Friday to visit the island nation, saying India was a long-standing friend of his country.
Modi is the first premiere to be invited to Sri Lanka after Rajapaksa took over the reins of the island nation.
The Sri Lankan president asserted that his country's ties with India were multifaceted, with a priority given to security-related matters.
With other nations, the initiatives and cooperation were by and large economic and commercial in nature, he noted.
"We will continue to work with India to ensure that the Indian Ocean Region is a zone of peace," Rajapaksa said in a joint press statement with Modi after the two leaders held talks in New Delhi.
He also described India as a long-standing friend of Sri Lanka.
"I would avail this opportunity to invite Prime Minister Modi to visit us as the first head of the government since my election as the President of Sri Lanka," Rajapaksa said.
Congratulating Rajapaksa on his victory, Modi said it was an honour that he chose India for his first foreign visit after taking over the reins of the island nation.
"It symbolises the strength and dynamism of the friendly relations between India and Sri Lanka. It is also a sign of how much importance both countries attach to these relations," he said.
The two leaders also discussed the issue of fishermen, a sensitive matter between the two countries.
"We discussed at length the fishermen issue and we will take steps to release the boats belonging to India (which are) in our custody," the Sri Lankan president said.
Besides cooperation in the area of security, Rajapaksa said Modi and he also discussed how the two countries could work together as regards economic matters.
"We also discussed how India can assist us in trade between our two countries," he said.
Rajapaksa, a former defence secretary who is credited with ending Sri Lanka's long civil war, was sworn-in as the island nation's president on November 18, a day after he won the closely-fought presidential election.  -- PTI
« Back to LIVE