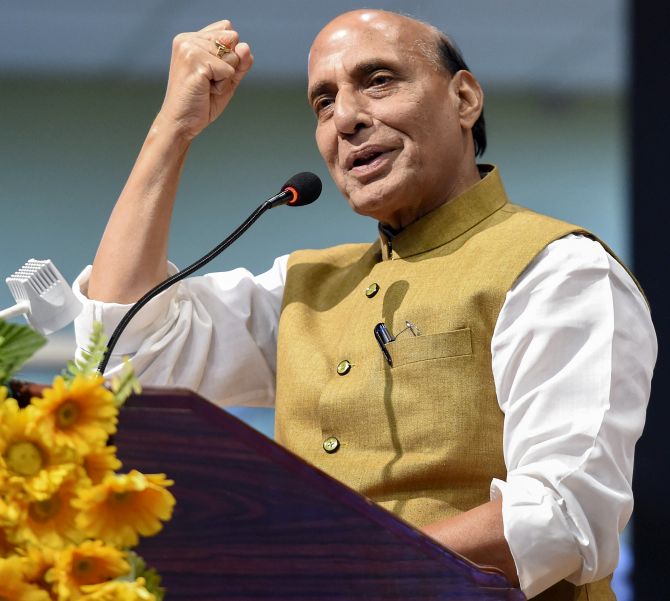 Union defence minister Rajnath Singh on Sunday said no power in the world could get in the way of construction of a "grand" Ram temple in Ayodhya.
Addressing a poll meeting in Pandu in Bishrampur assembly constituency for Jharkhad assembly election, the minister also noted that the Rafale fighter jets, acquired by the country from France, were capable of destroying terror camps across the border.
Amid "Jai Shree Ram" chants, he said, "A grand Ram temple will be built in Ayodhya and no power in the world can stop that from happening. The path for construction of the temple has been cleared by the Supreme Court."
Talking about the abrogation of Article 370 in Kashmir, the veteran BJP leader said, "In 1952, Dr Syama Prasad Mookerjee (founder of the Bharatiya Jana Sangh, the predecessor to the BJP) had said that there cannot be two Constitutions, two prime ministers and two flags in one country. We have fulfilled his dream and lived up to the promise made in our poll manifesto."
Condemning the Maoist violence over the past two days in the poll-bound state, he said, the BJP governments at the Centre and the state would give a befitting reply to those responsible for the attack.
"I have seen a couple of incidents happening in Jharkhand. You should be rest assured that the BJP governments at the Centre and the state will not allow anybody to use guns. A befitting reply will be given to them," he insisted.
Left-wing extremists killed four state police personnel in Latehar district and gunned down two persons, including a local BJP leader, in Palamu district in separate ambushes on Friday and Saturday.
Slamming the Congress, Singh said that the party's efforts to taint the reputation of the central government with corruption allegations failed to bear any fruit.
"The allegations of corruption in Rafale deal were aimed at maligning the government's image. The Congress tried hard... but its efforts were futile. I visited France to receive the fighter jet and also flew a sortie in one of the aircraft," the defence minister asserted.
He said the country had sent out a clear message that it would not cower in the face of terrorism.
"Rafale fighter jets are coming to India. We do not need to cross the borders now. We can use Rafale from our own territory to target terror camps across the border. That is the power India has achieved under the Narendra Modi government," the veteran BJP leader contended.
« Back to LIVE