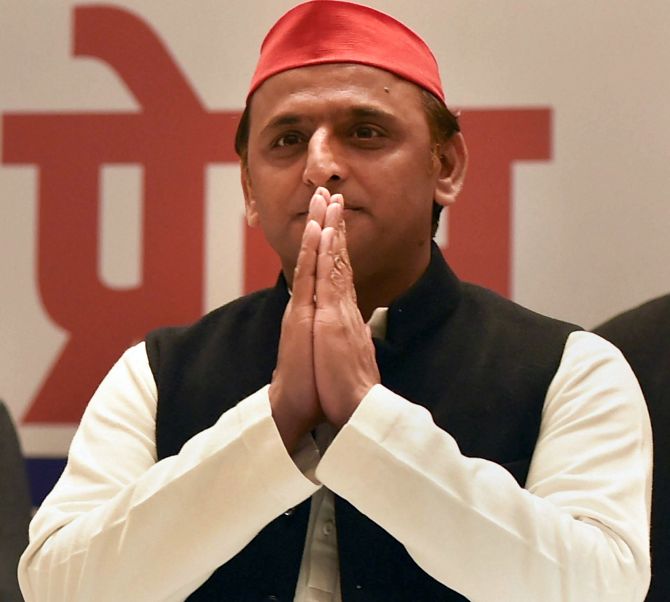 Former Uttar Pradesh Chief Minister Akhilesh Yadav on Saturday took a sarcastic jibe at the political developments in Maharashtra apparently targeting the BJP.
"Ab to lagta hai ki, 'jiska Governor uski Sarkar'," the Samajwadi Party chief said. "In the morning, I was thinking that some other party would form the government in Maharashtra. However, now I feel that whosoever has the governor will form the government," Yadav said.
His comments came after Bharatiya Janata Party's Devendra Fadnavis on Saturday morning took oath as the chief minister of Maharashtra, ending a month-long impasse in the state.
In a surprising turn of events, Nationalist Congress Party's Ajit Pawar took oath as Deputy Chief Minister after he "decided to form a stable government" with the BJP in the state.
-- ANI
« Back to LIVE

Trees and poles fall as 'Nisarga' makes landfall near Alibaug

Cyclone 'Nisarga' has made landfall near Alibaug on Maharashtra coast with the wind speed of more than 110 km per hour and heavy rainfall, leading to falling of many trees and electricity poles, a Raigad district official said.

"The killing of Abdul Rehman alias Fauji Bhai alias Fauji Baba, a Pakistani national, is a big success for security forces as he was a master in assembling improvised explosive devices for JeM," Inspector General of Police Vijay Kumar...

EPL was suspended on March 13 due to the pandemic and teams resumed training in small groups before voting last week to return to contact training ahead of a June 17 restart.

I know my importance in white-ball format: Hardik Pandya

Hardik Pandya is currently on road to recovery from the back injury which needed a surgery last year.

Be careful about injury management once play resumes: Pathan

Players in India haven't been able to practise since March 25 due to the countrywide lockdown imposed to contain the outbreak of COVID-19 pandemic.