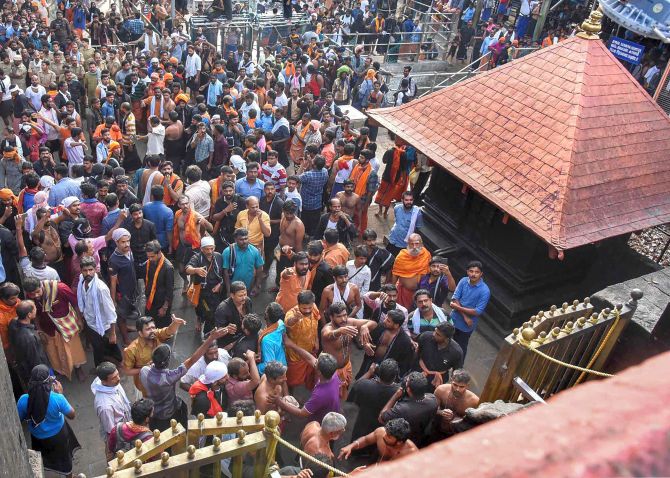 The Supreme Court's decision to refer the issue of the entry of women of all ages to the Sabarimala temple to a bench of seven judges is unfortunate and unnecessary, several women's rights activists said on Thursday.
A five-judge bench has unanimously agreed to refer various religious issues,  including the right of all women to enter the Sabarimala temple and mosques and the practice of female genital mutilation in the Dawoodi Bohra community, to a larger bench.  It gave a 3:2 split decision on petitions seeking a review of the apex court's September 2018 decision allowing women of all ages to enter the Sabarimala shrine in Kerala.
Brinda Karat, Communist Party of India-Marxist politburo member and activist, said the apex court had given "a very clear judgement" earlier and referring it to a larger bench is "unfortunate".
"If  the court wanted to look at other petitions  they could have done that but to tag it with this case... It is already so delayed and it is unfortunate that there will be more delay in the case," Karat said.
Women's rights activist Trupti Desai said women should be allowed entry into the Sabarimala temple till a seven-judge Supreme Court bench delivers a verdict on the issue, and vowed to offer prayers at the shrine when it opens for worship later this week.
"What I understand is that till the court order comes, entry is open for women and no one should protest against it. People who say there is no discrimination at all are wrong, because women of specific ages are not allowed there. I am going to offer prayers on November 16," the Pune-based Desai told reporters after the verdict.
Desai had made an unsuccessful attempt to enter the temple in November last year, weeks after the Supreme Court lifted the ban that prevented women and girls between the age of 10 and 50 from entering the famous Ayyappa shrine in Kerala and held that the centuries-old Hindu religious practice was illegal and unconstitutional.
Women's rights activist Kavita Krishnan asked why the review petition was sent to a larger bench.
"SC as a rule rejects review petitions... Review petition in Sec 377 was rejected. But #SabarimalaVerdict is referred to larger bench!... SC is giving us the distinct impression that verdicts, treatment of review petitions are influenced by what pleases/displeases those in power," she tweeted, referring to the court's judgement on consensual same-sex relationships.
Echoing her, Vani Subramanian, from women's empowerment group Saheli, questioned the ground for referring the matter to a larger bench.
"... there is no need to refer it to a larger bench. Unnecessarily widening the scope when there is no justification to do that," she said. -- PTI
« Back to LIVE