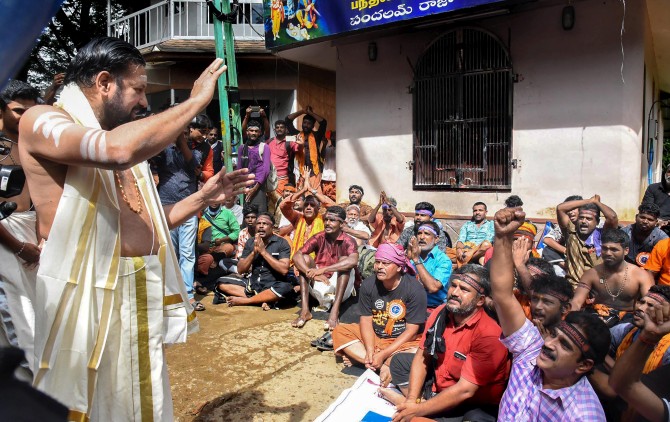 Sabarimala verdict reactions: Political parties in Kerala on Thursday welcomed the Supreme Court decision to refer its September 28, 2018 order allowing women of all ages into the Lord Ayyappa temple in Sabarimala to a larger bench.
Hailing the verdict, Leader of the Opposition Ramesh Chennithala asked the Left-led state government "not to create issues" by providing security and taking women in the banned age group to offer worship at the Ayyappa temple.
"Just because there is no stay of the September 28 verdict, the LDF government must try not to create issues by providing security and allowing women to enter Sabarimala. The state government must not implement its earlier agenda of taking women in the banned age group to the hill shrine," he said.
The Supreme Court on Thursday said restrictions on women in religious places was not limited to Sabarimala alone and was prevalent in other religions as well as it referred all review pleas to a larger seven-judge bench.
Chief Justice of India Ranjan Gogoi, reading the verdict on behalf of himself and Justices A M Khanwilkar and Indu Malhotra, said the larger bench will decide all such religious issues relating to Sabarimala, entry of women in mosques and practice of female genital mutilation in the Dawoodi Bohra community.
The state government was yet to react on the decision.
Former Chief Minister Oommen Chandy said the new decision will help in protecting the faith of devotees. He also hoped the pilgrimage season will be peaceful. Pandalam Royal family member Sasikumar Varma, one of the petitioners, said he was happy with the apex court's decision to review the September 28 verdict allowing women of all age groups to offer prayers at the Sabarimala Ayyappa temple. -- PTI
Image:  Sabarimala temple head priest (thantri) Kandararu Rajeevaru addresses devotees staging a protest against the Supreme Court verdict on the entry of women of all ages into the shrine last year.
« Back to LIVE