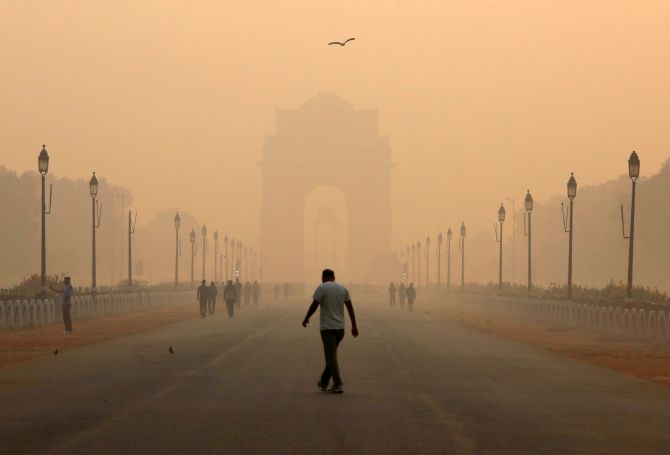 Delhi-NCR continued to battle severe pollution for the third consecutive day on Thursday with thick smog stiffening its choke as several children wrote to Prime Minister Narendra Modi urging him to take measures to ensure clean air for them.
Friday is unlikely to be any better with weather experts predicting a similar situation due to the influence of a western disturbance, the reason behind the dense cloud cover and a dip in wind speed.
However, wind speed is predicted to pick up on Saturday and a gradual decline in pollution is likely thereafter, they say.
The air quality index in the national capital read 463 at 4pm, up from 456 on Wednesday and more than four times the satisfactory levels of 50-100.
The satellite towns of Ghaziabad (467), Greater Noida (462), Gurgaon (447), Faridabad (446) and Noida (470) also reeled under the toxic smog.
An AQI between 201 and 300 is considered 'poor', 301-400 'very poor' and 401-500 'severe'.
Levels of PM 2.5 and PM 10 levels were nearly eight times higher than the normal limits at several locations in the city.
Schools remained closed on Thursday as the thick smog stiffened its choke on the national capital and its suburbs, restricting most of the children indoors on Children's Day.
Parents, students and school authorities voiced their anguish, wondering what the future holds and whether anything could be done to disperse the pollutants.
Several children wrote to Modi, urging him to take steps to ensure that they get clean air to breathe. -- PTI
« Back to LIVE