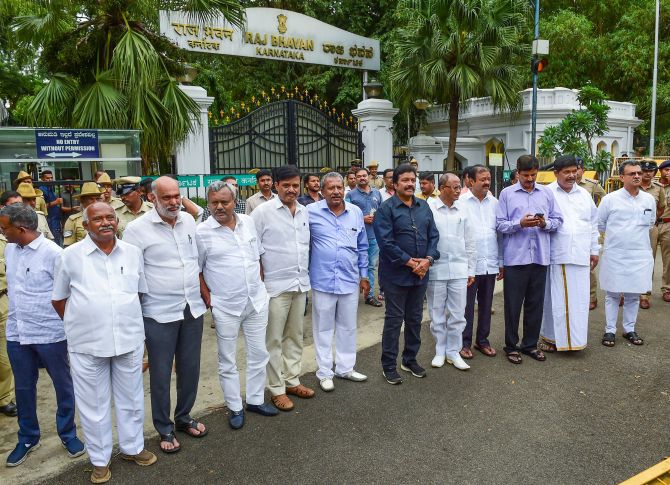 A day after the Supreme Court paved the way for them to contest the December 5 Assembly bypolls in Karnataka, 16 disqualified Congress-JD(S) legislators on Thursday joined the BJP in Bengaluru.
Chief Minister B S Yediyurappa, state BJP chief Nalin Kumar Kateel and National General Secretary in charge of Karnataka, P Muralidhar Rao were among those who welcomed them into the party fold. BJP that aims to win a majority of the 15 constituencies where bypolls will be held is likely to field most of them as the party candidates.
However, R Roshan Baig, a disqualified Congress legislator from Shivajinagar, was not inducted into the party on Thursday. BJP sources cited "reservations" expressed by party leadership over Baig, who is facing inquiry in the IMA ponzi scam, among the reasons for his non-induction. Interestingly Baig, a seven-time legislator, on Wednesday claimed he will be joining BJP along with the other legislators.
The Supreme Court on Wednesday had upheld the disqualification of 17 Congress-JD(S) MLAs in Karnataka by the then Assembly Speaker K R Ramesh Kumar but paved the way for them to contest the by-polls.
« Back to LIVE