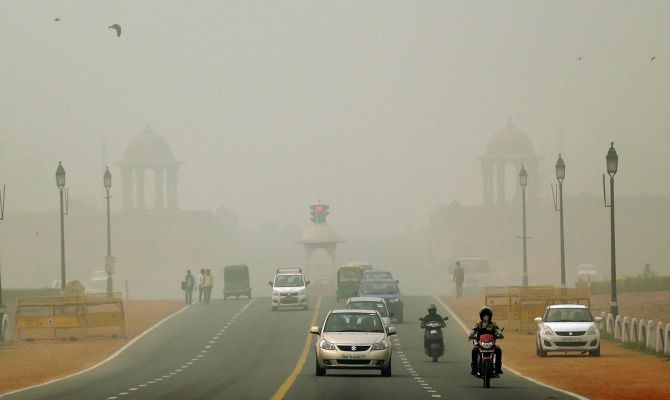 Air quality in the nation capital remained in the severe category on Thursday as the Delhi-NCR region continued to be shrouded by a thick layer of toxic smog.
Schools in the Delhi-NCR region remained closed as per the direction of the authorities Wednesday night. The closure of the schools was recommended by the Environment Pollution Control Authority (EPCA) citing hazardous air quality.
Several students, who remained confined indoors, chose not to celebrate Children's Day on Thursday.
Many students wrote letters to the prime minister urging him to take measures to ensure clean air for them.
"I used to enjoy soccer earlier but now I can only enjoy it on TV. I cannot play outside because the air is too toxic to breathe in," a student, Ishan Mahant, said in the letter.
Another student wrote, "At this point we need a strong directive from the government of India and the governments of the states affected to control this serious condition. We do have belief in our beloved Prime Minister who will surely take strong decision on this."
The air quality index deteriorated further to 463 at 2:30 pm in the city, three points more to what was recorded at 9:30 am.
The AQI monitoring centres at Dwarka Sector 8 recorded an AQI of 496, very close to the "severe plus" category.  The AQI monitoring centres at JLN Staidum and Nehru Nagar also recorded air quality levels over 490.
The only silver lining was the Aya Nagar air quality monitoring centre which recorded an AQI of 382. -- PTI
« Back to LIVE