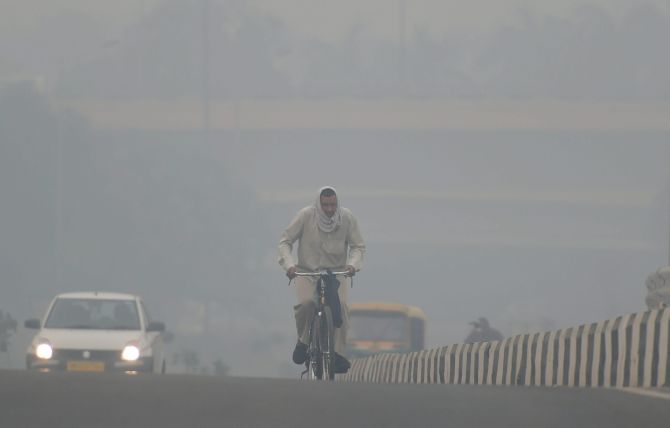 More than five lakh people died prematurely in India in 2016 due to dangerous levels of outdoor air pollution and over 97,000 of the them died after being exposed to pollutants from coal burning, a new report revealed on Thursday.
The Lancet Countdown 2019 on health and climate change also cautioned that the impact of air pollution in India will worsen if the country does not shift from coal-based energy.
It emphasised on rapidly decreasing coal use to zero, saying it was crucial to meeting the commitments of the Paris Agreement.
"Total energy supply from coal increased by 11 per cent in India from 2016 to 2018 and out of over 5.29 lakh premature deaths in 2016 due to dangerous levels of outdoor fine particulate air pollution (PM2.5), over 97,400 deaths were from coal.
"The energy landscape will have to change drastically, and nothing short of a 7.4 per cent year-on-year cut in fossil carbon dioxide emissions from 2019 to 2050 will limit global warming to the more ambitious goal of 1.5 degree Celsius," the report, authored by 35 institutions worldwide, said.
It said coal phase-out is essential, not only as a key measure to mitigate climate change, but also to reduce morbidity and mortality from air pollution.
"Coal continues to be the second largest contributor to global primary energy supply (after oil) and the largest source of electricity generation (at 38 per cent, compared with gas, the next highest at 23 per cent)," the report said, adding that most of the growth in total primary energy supply (TPES) of coal has been in Asia, notably China, India, and Southeast Asia.
Overall, carbon dioxide emissions from fossil fuels have risen by 2.6 per cent from 2016 to 2018, the report said.
Another global study from Switzerland, held earlier this year, revealed that China and the US may be the largest producers of coal power, but power plants in India take the highest toll in the world when it comes to health as coal-fired power plants produce more than just carbon dioxide, which contributes to global warming.
Coal burning also releases particulate matter, sulphur dioxide, nitrogen oxide and mercury -- thus damaging the health of many people around the world. -- PTI
« Back to LIVE