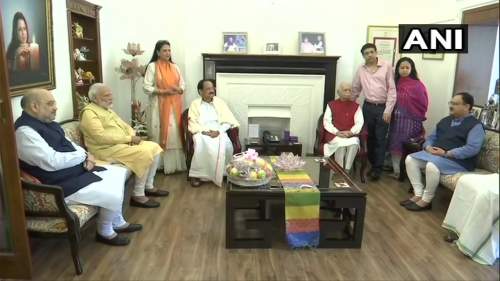 West Bengal Chief Minister Mamata Banerjee on Friday extended "heartiest greetings" to BJP stalwart LK Advani on his 92nd birthday. Taking to Twitter, she prayed for the former deputy prime minister's good health and happiness.
"Heartiest birthday greetings to LK Advaniji. Wish you good health and happiness," Banerjee tweeted. Advani, one of the co-founders and a senior leader of the BJP, had served as deputy prime minister from 2002 to 2004 under Atal Bihari Vajpayee. In 2015, he was awarded Padma Vibhushan, the country's second highest civilian honour. -- PTI
Image: PM Narendra Modi, Amit Shah, Vice President Venkaiah Naidu and JP Nadda meet LK Advani at his residence.
« Back to LIVE