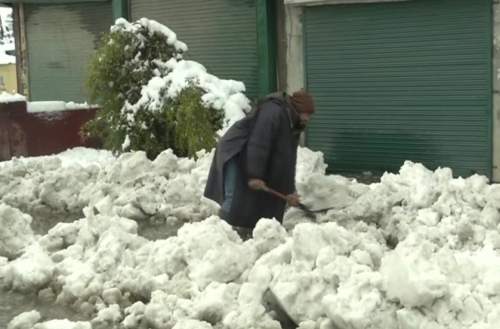 Heavy snowfall lashed Jammu and Kashmir, Himachal Pradesh and parts of Uttarakhand on Friday.Flight operations were adversely affected at Srinagar airport and road traffic between the valley and the Jammu region is also likely to be affected especially through the Mughal Road, an official of the Met department said.
Moderate to heavy snowfall was reported from Srinagar, Rajouri, Batote in Ramban district in Jammu and Kashmir, while Himachal received snowfall in Rashel village, Kyelang, and Khoksar in Lahaul-Spiti.
Badrinath located in Chamoli district, Uttarakhand also received fresh snowfall.
Presently, a snow-clearance operation is carried out in Srinagar to clear the traffic.
Meanwhile, private airline operator Indigo tweeted, "6ETravelAdvisory: Due to runway unavailability at #Srinagar airport, all flight operations to/fro #Srinagar have been suspended for today". -- ANI
Image: A man clears snow in Srinagar. Mechanised snow-clearance operations were also underway in the city following heavy snowfall.
« Back to LIVE