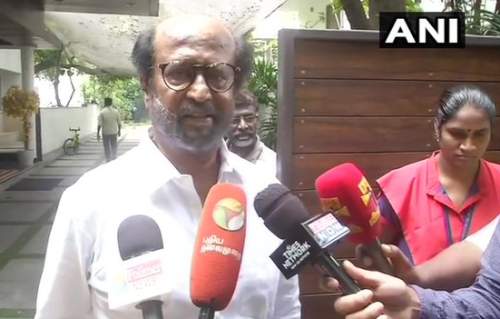 Superstar Rajinikanth on Friday said the BJP has not invited him to join the party, but insisted efforts were being made to paint him with "saffron", the idealogical colour the national party is associated with. Attempts were being made to paint both himself and Thiruvalluvar with saffron, the veteran star said referring to the recent controversy surrounding the Tamil saint-poet.
When asked about senior BJP leader Pon Radhakrishnan's recent meeting with him and the former's repeated assertions that the actor should join the party, Rajinikanth said no such has invitation has been made to him.
"No offer has been made (from BJP to join the party).. definitely not," he said. "Attempts are being made to paint me with BJP colour.. trying to paint me with saffron like Thiruvalluvar was done with.. Neither Thiruvalluvar nor me will get trapped," he said with a big laugh.
On November 1, the BJP's Tamil Nadu unit on its Twitter handle had written a couplet from Thiruvalluvar's classic "Thirukkural," questioning the use of education if the Almighty was not worshipped.
Tagging the couplet, the saffron party targeted the Dravidar Kazhagam, DMK and the Left parties for allegedly deriding God and for berating believers and questioned "what is the use of their education." Also, the party had posted a picture of Thiruvalluvar in saffron robes with sacred ash on his forehead. -- PTI
« Back to LIVE