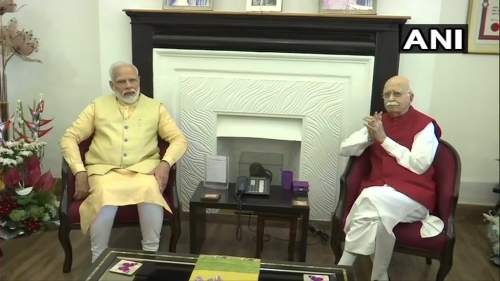 As BJP veteran Lal Krishna Advani turned 92 on Friday, Prime Minister Narendra Modi recalled his contribution in shaping the party and making it a "dominant pole" of Indian politics.
The prime minister, who visited the veteran leader at his home, said Advani never compromised on the core ideology. "Scholar, statesman and one of the most respected leaders, India will always cherish the exceptional contribution of Shri Lal Krishna Advani Ji towards empowering our citizens," the prime minister wrote on Twitter. Advani toiled for decades to give shape and strength to the BJP, he said, wishing him on his birthday.
"If over the years, our party has emerged as a dominant pole of Indian politics, it is because of leaders like AdvaniJi and the selfless karyakartas (workers) he groomed for decades," Modi said. "Not once has he compromised on the core ideology. When it came to safeguarding our democracy, he was at the forefront. As a minister, his administrative skills are universally lauded," he said. Home Minister Amit Shah also hailed Advani's dedication to the nation and said that his leadership, his tireless hard work and organization skills has made BJP into a national party. "The entire life of Advani is dedicated to the development and welfare of the nation. With his amazing leadership ability, he not only laid a strong foundation of the party but also inspired millions of workers. While in government, Advani ji worked to give a new momentum to India, the paramount value of the nation," he tweeted.
Others who met him along with the prime minister, include Vice President Venkaiah Naidu and BJP working president JP Nadda. Advani was born in 1927 in Karachi, now in Pakistan. PTI
« Back to LIVE