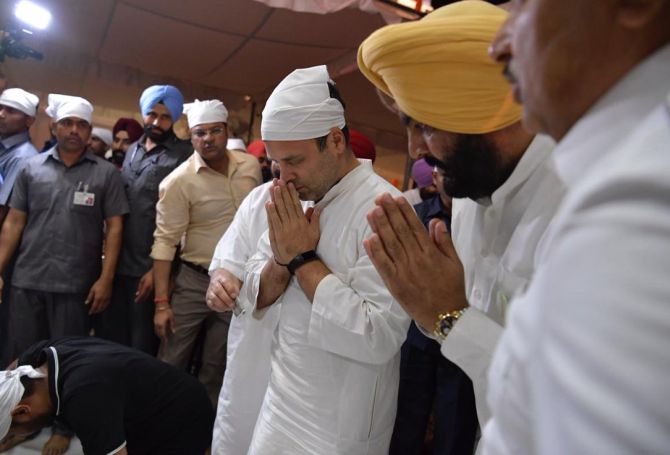 Intensifying his attack on the SAD-BJP alliance in Punjab, Congress president Rahul Gandhi Wednesday promised strict action against those involved in the 2015 desecration of the Guru Granth Sahib.
Recalling his previous visit to the Punjab town, where the first incident of "sacrilege' took place and two people died in police firing at protesters, Gandhi said, "Your 'dharm' was disrespected.' Strict action will be taken against the perpetrators, he promised. "I give you a guarantee on this.' The row over the 2015 incidents continues in Punjab with the Amarinder Singh-led Congress government, blaming the previous Shiromani Akali Dal-Bharatiya Janata Party government in the state for it.
At another rally on Tuesday, Rahul Gandhi's sister and party general secretary Priyanka Gandhi had also tried to corner BJP's ally SAD over the issue.
The Congress focus on the desecration religious scriptures comes at a time when the BJP has renewed its attack on the party over the 1984 anti-Sikh riots, both emotive issues in state which goes to the polls on Sunday. -- PTI
« Back to LIVE