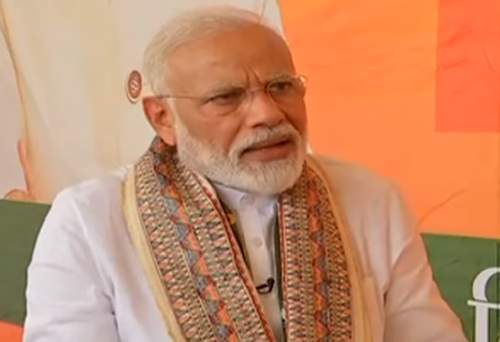 Congress President Rahul Gandhi Wednesday lashed out at Narendra Modi, saying the Prime Minister thinks "only person can run the country' while actually it is the people who run the nation. Gandhi noted that Modi used to make "fun" of former PM Manmohan Singh "but after five years now Modiji does not make fun of Manmohanji. Today the country is making fun of him (Modi)".
Addressing a poll rally at Bargari in Faridkot in favour of Congress candidate Mohd Sadique from Faridkot Lok Sabha seat, Gandhi referred to sacrilege incidents in 2015 and promised strict action against those involved in desecration of religious scriptures.
"I recall coming here when your 'dharam' (Sikh holy book Guru Granth Sahib) was disrespected. And those who did wrong, strict action will be taken against them and I give you guarantee on this,' said Gandhi.
On Tuesday, Congress general secretary Priyanka Gandhi, while addressing a poll rally in Bathinda, had lashed out at the BJP's ally SAD over the sacrilege issue. Attacking Modi, Gandhi said, "The PM thinks only one person can run country, but actually it is people who run it."
Gandhi also raised the Rafale jet deal issue and dared Modi to hold a debate with him on corruption. Criticising the BJP government for demonetisation and "Gabbar Singh Tax', he claimed these two decisions of Modi government had "destroyed' the economy and left lakhs jobless.
The Congress President also hit out at Modi for not crediting Rs 15 lakh in accounts of every citizen, saying the prime minister "lied" to people on this and on giving two crore jobs. -- PTI
« Back to LIVE