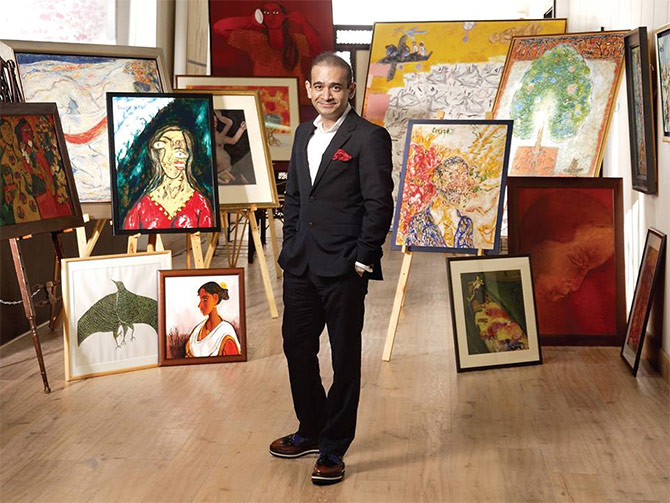 The firm of Nirav Modi, the main accused in the $2 billion PNB scam case, has moved the Bombay High Court against a special court order which permitted the Income Tax Department to auction 68 paintings seized as part of its probe against the diamantaire.
In a petition filed before the high court, the firm, Camelot Enterprises, has said such action is unlawful.
According to the court website, the hearing of the petition is scheduled for April 1.
However, the petitioner is likely to seek an urgent hearing in the case, at an earlier date, since the auction is scheduled to begin on March 27.
Last week, a special court here permitted the Enforcement Directorate to auction 11 luxury vehicles belonging to Modi.
The special court also allowed the Income Tax Department to auction the high value art collection of the diamantaire who is wanted by agencies on charges of tax evasion and money laundering.
According to authorities, the 68 paintings are valued at more than Rs 50 crore.
Modi was arrested in London last week. He was remanded in custody till March 29 by a court there.
Modi and his uncle, Mehul Choksi, another accused in the case, had left India before the fraud came to light in January 2018.
The Income Tax Department had last month provisionally attached 29 properties and 105 bank accounts of Modi, his family members and firms as part of its probe.
The taxman had also filed a chargesheet against Modi before the special court under sections 276 C (1) (wilful attempt to evade tax), 277 A (false statement in verification), 278 B (offences by companies) and 278 E (presumption as to culpable mental state) of the Income Tax Act, 1961.
-- PTI
« Back to LIVE