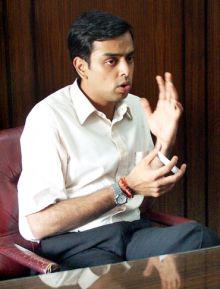 The Congress on Monday appointed former union minister Milind Deora as Mumbai Regional Congress Committee chief, replacing Sanjay Nirupam.
Nirupam had been at loggerheads with senior party leaders in the state and the move has come as a bid to quell the intense infighting within the Mumbai Congress.
"Congress president Rahul Gandhi has appointed Milind Deora as the new president of the Mumbai Regional Congress Committee. The party appreciates the contribution of outgoing president Sanjay Nirupam," a statement from the party said.
Nirupam, meanwhile, was nominated as the party candidate from the Mumbai North West Lok Sabha constituency.
Deora, the son of former oil minister Murli Deora, is considered close to the Congress chief.
Nirupam, a former two-time Rajya Sabha member and was earlier with the Shiv Sena, was appointed the president of the Mumbai Regional Congress Committee in March 2017.
During his two-year stint as the MRCC chief, the party witnessed bickerings and increased differences among local leadership leading to public spats.
-- PTI
« Back to LIVE