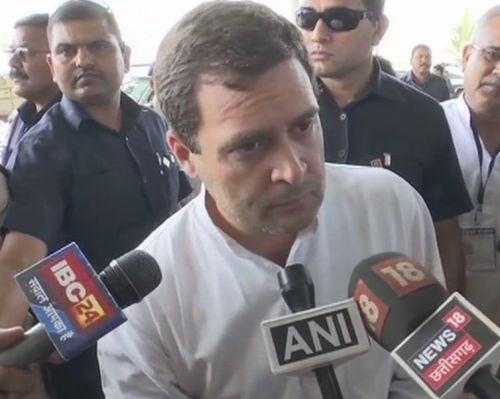 Congress President Rahul Gandhi on Tom Vadakkan joining the BJP: "Vadakkan? No, no Vadakkan is not a big leader."
Tom Vadakkan, who used to be the face of the Congress in the capacity of a spokesperson, joined the BJP on Thursday, saying he had quit the grand old party because it was now resorting to "use and throw' approach.
He said the dynastic politics in Congress has reached a level which is not acceptable to "self-respecting people'.
Vadakkan, National Secretary (Communications) in the All India Congress Committee was inducted into the BJP in the presence of Union Minister Ravi Shankar Prasad.
"The reason why I left the Congress party, with a heavy heart, is that the attack by the Pakistani terrorists on our land and the reaction from my party was sad indeed. When you question the integrity of the armed forces, I am deeply hurt and that is why I am here," he said after joining the party.
"The question is not of the ideology. If a political party takes a decision that is against the nation, I had no other option but to leave it. It is about love for our nation. You are aware of the issues and during such a time, making such statements on such issues is vague," said Vadakkan while attacking the Congress.
« Back to LIVE