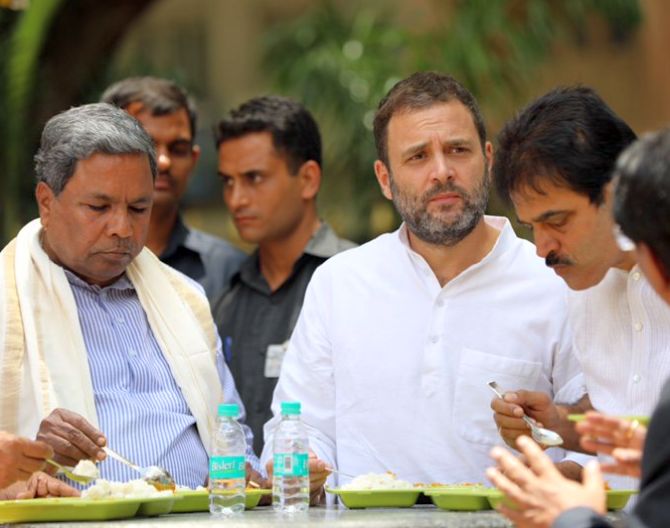 Former chief minister Siddaramaiah on Friday said the Karnataka Congress wants party president Rahul Gandhi to contest the coming Lok Sabha polls from the southern state.
Calling Gandhi the "next Prime Minister of India", the Congress Legislature Party leader recalled his grandmother Indira Gandhi and mother Sonia Gandhi contesting the Lok Sabha polls from Karnataka in the past.
"Karnataka has always supported & encouraged @INCIndia leaders. It has been proved in case of Smt. Indira ji & Smt. Sonia ji. We also want our next Prime Minister of India Shri. @RahulGandhi to contest from Karnataka & herald new developmental paradigm. #RaGaFromKarnataka," Siddaramaiah said in a tweet.
While Indira Gandhi had scripted her political comeback from Chikkamagaluru in Karnataka by winning the Lok Sabha bypolls in 1978, UPA chairperson Sonia Gandhi had contested and won from Bellary in 1999, trouncing the BJP's Sushma Swaraj.
Interestingly, the Congress has ceded the Chikkamagaluru seat to its alliance partner Janata Dal (Secular) this time, while Bellary remains with the grand old party. Siddaramaiah's tweet has come amid reports about pressure within the Congress for Rahul Gandhi to contest from one of the seats in south India.
The Congress had, earlier this month, announced that the party chief would contest from Amethi and Sonia Gandhi from Rae Bareli, both traditional strongholds of the party in Uttar Pradesh. -- PTI
« Back to LIVE