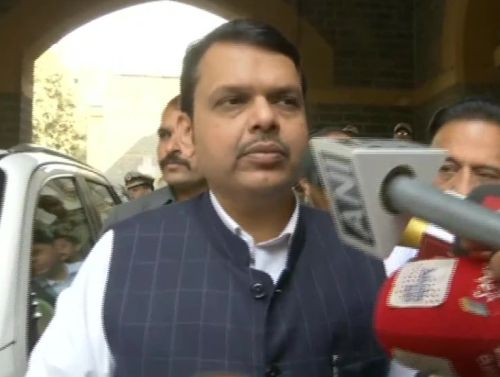 Maharashtra Chief Minister Devendra Fadnavis on Friday visited St George hospital in Mumbai where several of the injured in Thursday's foot overbridge collapse near the crowded Chhatrapati Shivaji Maharaj Terminus railway station have been admitted.
Speaking to the media, Fadnavis said, "I met all the 11 injured. Out of 11, ten are in the general ward and one is in the ICU but is out of danger. It is sad that even after carrying out structural audits, such incidents are taking place... A thorough investigation will be carried out in the case. I have also asked the BMC to finish primary repair work of the bridge till the evening so that people can commute hassle-free," he added.
At least six people were killed and over 30 injured after a portion of a foot overbridge near the bustling railway station collapsed on Thursday evening. A big slab of the FOB came crashing down at around 7.20 pm due to which several pedestrians were injured.
The injured were admitted to three nearby hospitals -- St George Hospital, GT Hospital and Bombay Hospital.
Atmaram Babu recalled how he got the information about his injured brother moments after the incident took place. "My relatives got the information on WhatsApp about the collapse of the bridge and later informed about me about my brother. He has sustained injuries on his leg and waist. He use to sell bananas on the bridge. Before him, our uncle used to sell bananas on the bridge. We are doing business on that bridge from a very long time." -- ANI
« Back to LIVE