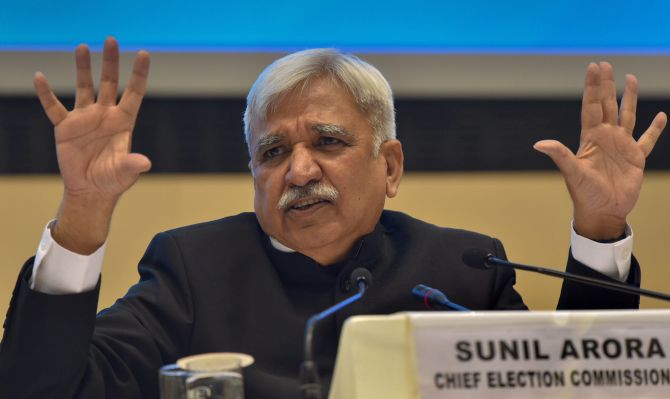 Holding free and fair elections is one of the biggest challenges facing the Indian democracy due to prevalent 'abuse' of money power, Chief Election Commissioner Sunil Arora said on Friday.
Addressing a meeting of the Multi-Departmental Committee on Election Intelligence in New Delhi, Arora also said the poll panel is determined to curb the menace and it has issued detailed guidelines to monitor election expenditure incurred by candidates and political parties.
"The expenditure monitoring mechanism has got stronger over a period of time and larger seizures have been made by our enforcement teams in successive elections," a statement issued by the poll panel quoted Arora as saying.
Heads of tax boards, law enforcement agencies, central paramilitary forces and representatives of financial institutions attended the meeting.
"Conducting clean elections is now one of the biggest challenges in our democracy given the prevalent abuse of money power, particularly when it manifests in inducement of voters," he was quoted as saying.
Election Commissioner Ashok Lavasa said implementation of instructions of the poll panel requires coordination among various expenditure monitoring teams and the agencies tasked with enforcement.
Sharing of intelligence amongst the agencies should ensure that there is concerted attack on problems faced. He noted that multi-dimensional, multi-fanged crime needs to be tackled with coordinated action.
He also cautioned that mischief mongers are devising more ingenious ways to beat the system.
Fellow Election Commissioner Sushil Chandra said that ensuring there was no illegal use of money for buying votes is vital for clean elections.
Use of money during the elections has increased leaps and bounds in recent times and, therefore, there is a greater need to have synergy amongst various enforcement agencies so that a collective strategy is developed to fight this menace, he said.
Other issues discussed at the meeting included ways of curbing covert expenditure by candidates and political parties, sensitisation of the law-enforcement agencies about their role during elections, cooperation and sharing of intelligence of economic offences amongst law enforcement agencies.  -- PTI
« Back to LIVE