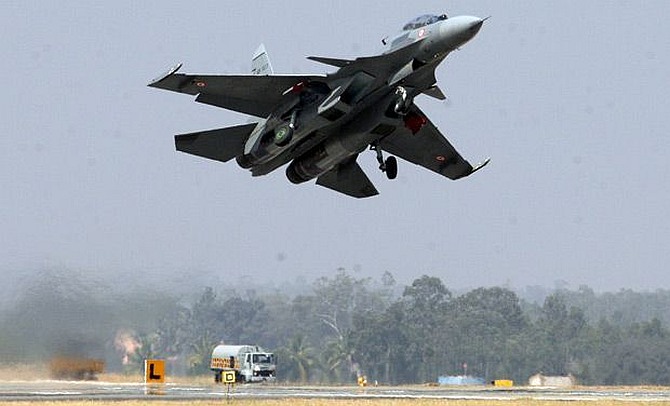 The Indian Air Force is in the process of equipping its Su-30MKI with Israeli SPICE-2000 laser-guided bombs, as part of its effort to make the fighter jets more potent, official sources said.
Currently, the IAF's Mirage-2000 are equipped with the SPICE-2000 bombs and these aircraft were used in the pre-dawn strike on the biggest terror camp of the Jaish-e-Mohammed (JeM) terror outfit in Pakistan recently.
"The IAF is in the process of equipping Su-30MKI with Israeli SPICE-2000 bombs, to make the fighter jets more potent," official sources said.
The move comes amid heightened tensions in ties between India and Pakistan.
A fleet of Mirage 2000 deep-penetration fighter jets was chosen for the non-military, preemptive strike on February 26 on the camp of the JeM in Pakistan due to the combat aircraft's capabilities of hitting long-range targets with 'pin-point' accuracy and dropping a range of bombs and missiles including laser-guided ones, government sources had earlier said.
In a statement released on February 26, Foreign Secretary Vijay Gokhale had said that India struck the JeM's camp in Balakot and that a very large number of JeM terrorists, trainers, senior commanders and groups of jihadis who were being trained for fidayeen action were eliminated.
The air strike had escalated tensions between the two countries, with New Delhi saying its move was a 'non-military and preemptive strike'.
Meanwhile, government sources in New Delhi asserted on Tuesday that India will have 'all options' available in case there is another cross-border terror attack, while maintaining that the counter-terror strikes in Balakot were intended to demonstrate the 'capacity and will' to act against terror network in Pakistan.  -- PTI
« Back to LIVE