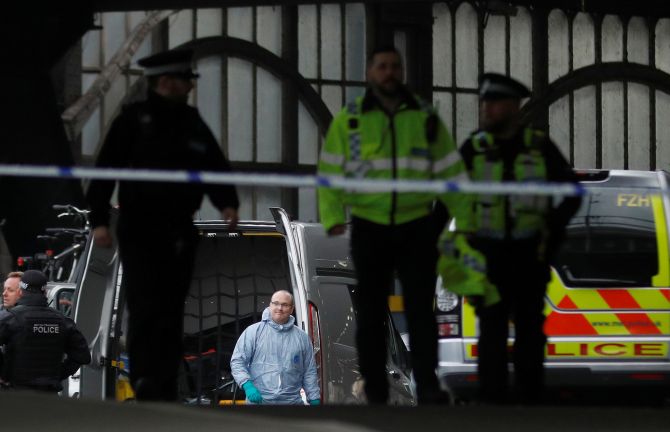 Britain's counter-terrorism police are investigating after three padded mailing bags with what appears to be small explosive devices inside were found in London.
Police said smaller bags inside the mailers enclosed the devices that 'appear capable of igniting an initially small fire when opened'.
Officials say the Met Police Counter Terrorism Command 'is treating the incidents as a linked series'.
One mailer was found near Heathrow Airport. A building was evacuated as a precaution after the package was opened and part of it burned.
Officials say the building is not at the airport and flights were not affected. There were no injuries.
Another mailer turned up near City Airport, and the third in the mail room at Waterloo Station.
The package at the rail station was not opened.  -- Agencies
IMAGE: Police officers including one wearing a forensic suit, are seen in a cordoned-off area at Waterloo station near to where a suspicious package was found, in London, on Tuesday. Photograph: Peter Nicholls/Reuters
« Back to LIVE