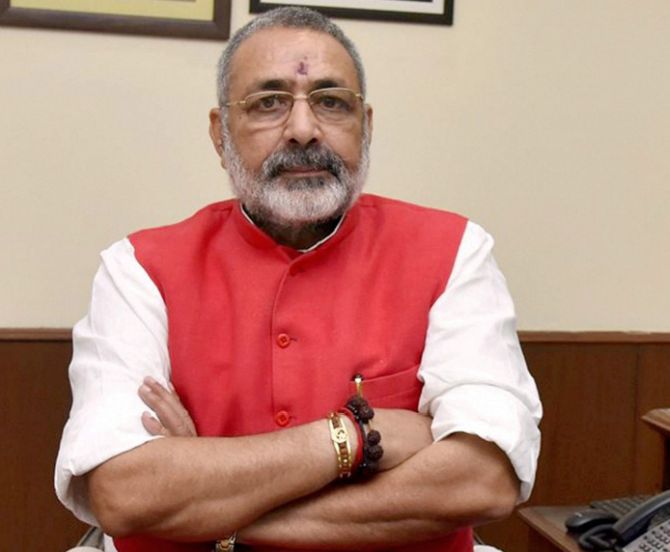 Union Minister Giriraj Singh on Wednesday said 'award wapsi' gang has become active again to destabilise the Narendra Modi government after 49 eminent citizens wrote to the prime minister saying that 'Jai Shri Ram' has become a provocative war cry.
In an open letter, they also emphasised that there is "no democracy without dissent".
"Where were these people who are raising questions of mob lynching when Kairana (UP) MLA recently asked Muslims not to buy goods from shops of Hindus. Why they remained silent?," Singh, who is in charge of the Ministry of Fisheries, Animal Husbandry and Dairying, told reporters.
To queries about the letter, the senior BJP leader also said it seems the 'award wapsi' gang has become active.
He was referring to celebrities who had returned government awards during the previous term of the Modi regime to protest against alleged intolerance.
"The award wapsi gang has once again become active to destabilise and defame the Modi government," the minister said.
The 49 eminent citizens, in the letter dated July 23, said 'Jai Shri Ram' has become a provocative war cry with many lynchings taking place in its name.
The letter has been signed by film makers Adoor Gopalakrishnan and Aparna Sen, vocalist Shubha Mudgal, historian Ramchandra Guha and sociologist Ashis Nandy, among others.
"We, as peace loving and proud Indians, are deeply concerned about a number of tragic events that have been happening in recent times in our beloved country," the letter said. -- PTI
« Back to LIVE

Under the phased unlock process, reopening of restaurants with 50 per cent capacity and one weekly market per municipal zones will be allowed from June 14, Chief Minister Arvind Kejriwal said.

'It is positive news not just for us but for the nation. She is training in America and I am closely watching the way she is working and I have no doubt that she will fight for a gold medal.'