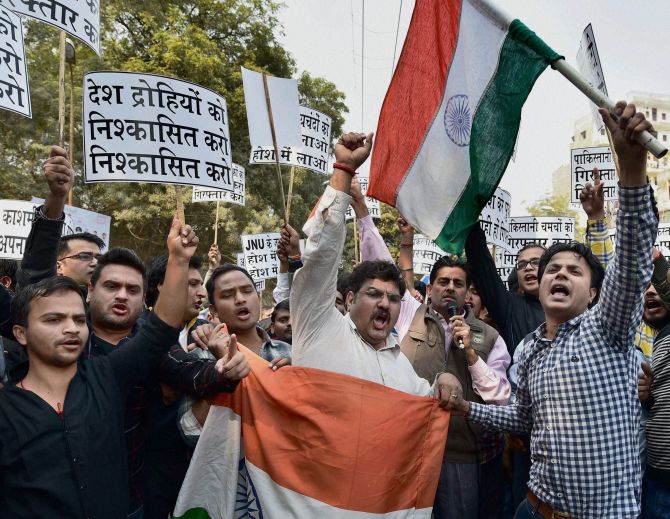 A court in Bengaluru has closed a sedition case against the Amnesty India, pertaining to a petition filed by the Akhil Bharatiya Vidyarthi Parishad against the human rights body on August 15, 2016.
The complaint relates to an event the Amnesty India had held as part of a campaign to seek justice for alleged human rights violations in the state of Jammu and Kashmir.
The first information report in the case mentioned a number of offences, including sedition, unlawful assembly, rioting and promoting enmity.
The 8th Additional Chief Metropolitan Magistrate ordered the closing of the case on January 8 after the sub-inspector of the police station concerned filed a 'B' report.
A 'B' report pertains to the winding up of the case.
The ACMM also noted that the complainant (ABVP) did not challenge the complaint, though the police had issued a notice to them.
"The complainant had refused to receive the notice. Complainant called out absent. Hence, objection for 'B' report taken as not filed.
"B report is accepted. Close the case," the ACMM noted.
Welcoming the order, the Amnesty International, in a statement, said the ruling vindicated everything the Amnesty India had said from the time this 'politically-motivated complaint' was filed.
"This was a case that should never have been registered, given previous Supreme Court rulings on what constitutes sedition.
"It has been a waste of public money and resources, and a distraction from real issues," Aakar Patel, country head of Amnesty India, said.  -- PTI
« Back to LIVE