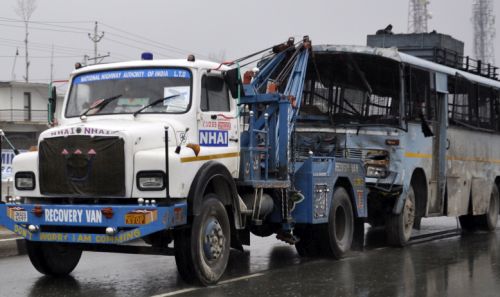 The movement of convoy of security forces in Kashmir Valley was suspended on Friday apprehending law and order situation, a day after an audacious attack on a bus killed 40 CRPF personnel, officials said. There will be no convoy movement on Friday in Kashmir Valley as there is a possibility of law and order problems, a Home Ministry official said.
Movement of isolated vehicles is strictly prohibited while movement of Army and CRPF vehicles in the interior, inter-district and intra-district in the valley is also banned on Friday, the official said. Forty CRPF personnel were killed and five injured on Thursday in one of the deadliest terror attacks in Jammu and Kashmir when a Jaish-e-Mohammad suicide bomber rammed a vehicle carrying over 100 kg of explosives into their bus in Pulwama district.
The bus was part of a 78 vehicles convoy of CRPF travelling from Jammu to Srinagar. Prime Minister Narendra Modi on Friday said those responsible for the attack will pay "a very heavy price" and security forces will be given a free hand to deal with terrorists.  -- PTI
Image: A damaged bus, part of the CRPF convoy that was attacked yesterday, is hauled away. Very little remains of the bus that the car bomber rammed into. Pic: Umar Ganie.
« Back to LIVE