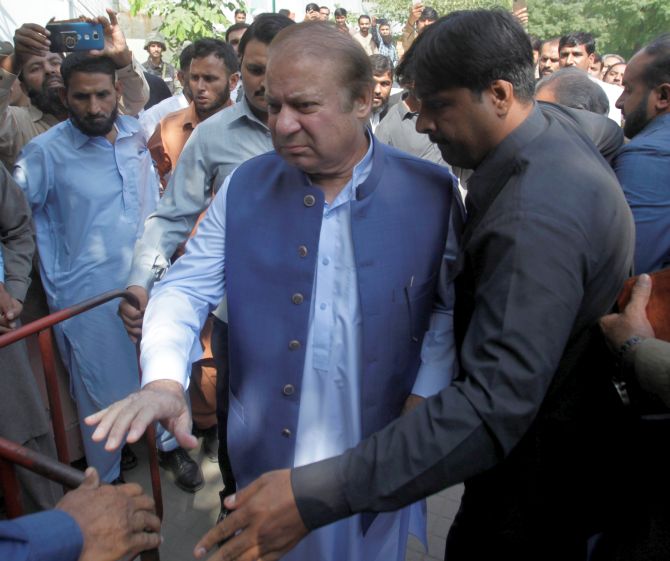 Pakistan's Punjab provincial government on Saturday ordered that Nawaz Sharif be shifted to a hospital from jail, days after a special medical board concluded that the former prime minister has developed cardiac complications.
Sharif, 69, has been serving a seven-year jail term in Lahore's Kot Lakhpat jail in the Al-Azizia Steel Mills corruption case.
The order came after a special medical board constituted to monitor his health recommended that he should be shifted to a hospital. The board examined the deposed prime minister in jail this week.
In a directive to the jail administration, the Punjab government said: "In view of Nawaz Sharif's multiple co-morbidities and complex cardiac history with multiple cardiac procedures with complications abroad, it is advised that he be admitted for further investigations/management in a hospital where multidisciplinary care is available."
It further said Sharif should be shifted to the Services Hospital, Lahore to 'carry out detailed medical examination and management for minimum required period'.
Foolproof security arrangement should also be made during his shifting and stay in the hospital, it directed.
Punjab Information Minister Fayazul Hasan Chohan said Sharif will be shifted to the hospital on Saturday.
He said the government has decided to shift Sharif to the hospital in the light of the report of the six-member medical board.
"The government was providing best health facilities to Sharif in jail but since the medical board suggested his hospitalisation, the government has no objection to it," the minister said.
On Wednesday, the 'larger special medical board' headed by Dr Hamid Sharif Khan examined Sharif in the jail.
The three-time prime minister, who is serving a seven-year imprisonment in Al-Azizia Mills corruption case, was earlier rushed to Lahore's Punjab Institute of Cardiology after he complained of heart-related complications.
He was later discharged from the hospital and taken back to jail following the medical tests.
Sharif's personal cardiologist Dr Adnan Khan said: "Since day one, I have been mentioning that Sharif is having frequent episodes of angina, which was confirmed by Thallium scan. The government functionaries kept denying."
Sharif's family has also demanded that he should be shifted to a hospital as the Pakistan Muslim League-Nawaz supremo was not getting proper medical facilities in the jail.
Sharif has been behind the bars since December 24, 2018, after an accountability court convicted him in one of the three corruption cases filed under the direction of the Supreme Court.
The Al-Azizia Steel Mill case was about setting up steel mills in Saudi Arabia allegedly with corruption money.
Three corruption cases -- Avenfield properties case, Flagship investment case and Al-Azizia steel mills case -- were launched against the Sharif family by the National Accountability Bureau in 2017 following a judgment by the Supreme Court that disqualified Sharif in the Panama Papers case in 2017.  -- PTI
« Back to LIVE