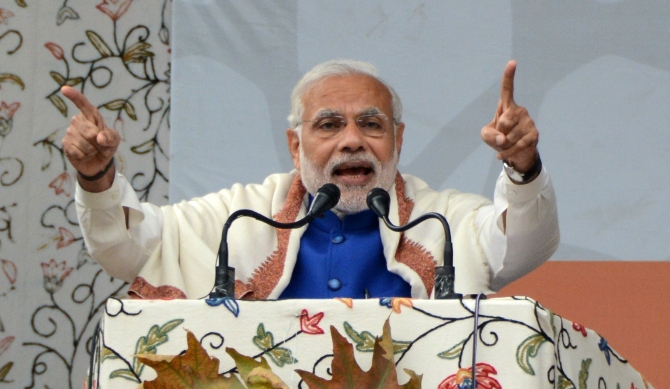 Prime Minister Narendra Modi will visit Jammu, Srinagar and Leh on Sunday to inaugurate several development projects.
He will also visit the famous Dal lake in Srinagar during his visit to Jammu and Kashmir.
The prime minister will lay of the foundation stones of two All India Institutes of Medical Sciences (AIIMS) in Vijaypur and Awantipora, a statement from his office said.
The Union Cabinet had recently approved setting up of the premier hospitals in the border state.
Setting up of new AIIMS would transform health care facilities, health education and training in the region, it said.
Modi will also lay the foundation stone of northern regional centre campus of Indian Institute of Mass Communication in Jammu.
University of Ladakh will also be launched by the prime minister. It will be the first-ever university in the Ladakh region of the state.
It will be a cluster university comprising degree colleges of Leh, Kargil, Nubra, Zanskar, Drass and Khaltsi. The university will have administrative offices in Leh and Kargil.
The prime minister will also digitally launch various projects under the Rashtriya Uchchatar Shiksha Abhiyan (RUSA).
He will unveil plaques via video-conference to lay foundation stones of 54 new model degree colleges, 11 professional colleges and one women's university in the country.
He will also inaugurate 16 model degree colleges, and 66 entrepreneurship, innovation and career hubs in the country.
Besides, he will lay the foundation stones of three model degree colleges in Kishtwar, Kupwara and Baramulla in Jammu and Kashmir.
Modi will declare 100-per cent electrification of households in Jammu and Kashmir under the central government's Saubhagya Scheme.
Modi will lay the foundation stone of 624-MW Kiru hydroelectric project in Kishtwar. It is a run-of-the-river project across the Chenab.
He will also inaugurate the 9-MW Dah hydroelectric project. Located in Dah near village Datang, this project is a run-of-the-river scheme. Modi will dedicate to the nation the 220-KV Srinagar-Alusteng-Drass-Kargil-Leh transmission system.
The foundation stone of this prestigious project was laid by Modi in August 2014.
The 400-KV D/C Jalandhar-Samba-Rajouri-Shopian-Amargarh (Sopore) transmission line will also be dedicated to the nation by Modi.
The project has augmented the grid connectivity in Jammu and Kashmir.
The prime minister will lay the foundation stone of 1,640-metre span double-lane bridge over the Chenab river in Sajwal.
The project will provide an alternative route for the population of Sajwal and Indri Pattian. With the completion of this bridge, the distance between Sajwal and Indri Pattian will be reduced to 5 km from 47 km earlier, the statement said.
Modi had earlier visited Jammu, Srinagar and Leh on May 19, 2018 to lay the foundation stones of various infrastructure projects in the state. -- PTI
« Back to LIVE