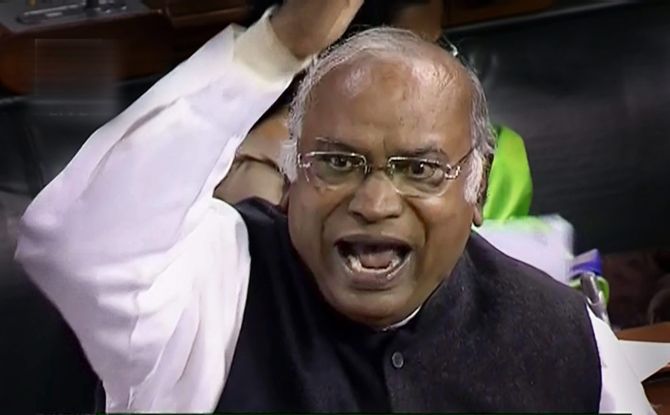 Congress leader Mallikarjun Kharge, who is a member of the Prime Minister Narendra Modi-led panel, tried to 'manipulate' the criteria for selection of Central Bureau of Investigation chief with the ulterior motive of accommodating some of his preferred officers, Union Minister Jitendra Singh claimed on Saturday.
He also hit out at Kharge for 'giving his own version' of the panel's deliberations to the media.
"Kharge tried to manipulate the objective criteria, based on independent and impartial assessment, to select CBI Director...He wanted to include some officers of his preference in the short-list of candidates," Singh, the Union Minister of State for Personnel, told PTI.
Former Madhya Pradesh Police chief Rishi Kumar Shukla was on Saturday appointed the chief of the CBI for a fixed tenure of two years, according to a Personnel Ministry order.
Shukla, a 1983-batch IPS officer, has been appointed in place of Alok Kumar Verma, who was removed from the post of CBI director on January 10.
Singh said that Chief Justice of India Ranjan Gogoi fully endorsed the objective criteria applied for selecting the head of the CBI.
The high-powered selection panel comprises Prime Minister Modi, CJI Gogoi and Congress MP Kharge, who is the leader of the largest opposition party in Lok Sabha.  -- PTI
« Back to LIVE