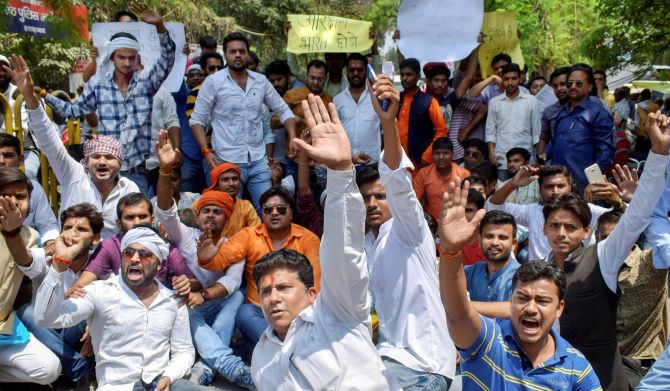 The Bihar cabinet has approved a draft bill on providing 10 per cent quota in government jobs and educational institutions to the economically weaker sections among the general category, a state government official said on Saturday.
The official, who did not wish to be named, said that the draft bill was approved in a cabinet meeting late on Friday night which was chaired by Chief Minister Nitish Kumar.
The bill would be tabled before the bicameral state legislature during the budget session beginning February 11, he added.
The Narendra Modi government has introduced the quota for the economically backward among the general category vide a constitutional amendment.
The quotas have so far been implemented in Gujarat and Jharkhand both states ruled by the Bharatiya Janata Party.
A few political parties, such as Rashtriya Janata Dal, Dravida Munnetra Kazhagam and All India Majlis-e-Ittehadul Muslimeen, have, however, been opposed to the quota.
Chief Minister Nitish Kumar, whose Janata Dal-United is an ally of the BJP and has supported the quota, had said last month that his government was seeking legal opinion on whether to extend reservation benefits to the economically weaker sections through an executive order or through the legislative route.  -- PTI
« Back to LIVE