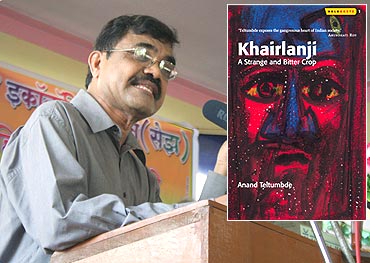 Anand Teltumbde, an accused in Bhima Koregaon case, has been arrested by Pune Police from Mumbai early morning on Saturday.
The Pune Sessions Court on Friday rejected an anticipatory bail application of the activist and professor.
"In my view, there is sufficient material collected by the investigating officer to show the involvement of the present accused in the alleged commission of the offence. Moreover, investigation in respect of present applicant/accused is at (a) very crucial stage," said an order pronounced by special judge KD Vadane
Presently, he has been kept at Vile Parle police station in Mumbai.
Last month, the Supreme Court dismissed Teltumbde's plea seeking quashing of an FIR registered against him by the Pune Police in connection with the Bhima-Koregaonviolence.On January 1 last year, violence had erupted during the 200th-anniversary celebrations of Bhima-Koregaon battle, leaving one dead and several injured.
-- ANI
« Back to LIVE