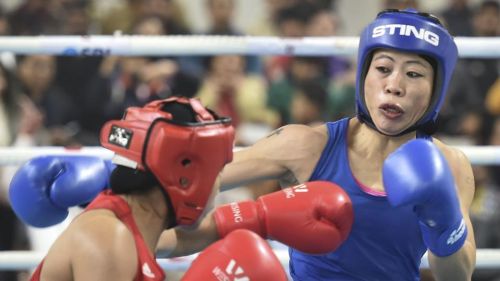 Sports Minister Kiren Rijiju on Monday said not much should be made of the "ugly spat" that marred the trial bout between M C Mary Kom and Nikhat Zareen and the country is proud of both the six-time world champion and her promising challenger. Mary Kom defeated Zareen 9-1 in the trials held on Saturday to make the squad for Olympic Qualifiers in China in February.
The bout was marred by acrimony as the two boxers didn't shake hands after the contest and Mary Kom ignored an attempted hug by Zareen. "Mary Kom is a legend who has achieved what no other boxer has ever achieved in the World Amateur Boxing. Nikhat Zareen is an amazing boxer who has the potential to follow the footsteps of Mary Kom. India is proud of both of them. Period," Rijiju tweeted. "...passions & emotions are the souls of Sports! The only point to bear in mind is, in professional sports, the players & money matter more whereas in amateur sports it's the nation. The ugly spate (sic) shouldn't have adverse effects on players while representing India," he added.
Zareen had approached Rijiju with an open letter when the Boxing Federation of India (BFI) flip-flopped on a stated policy and announced direct selection of Mary Kom for the Olympic qualifiers.
Rijiju had steered clear of the matter at that time citing the Olympic charter. On Saturday, Mary Kom said she was upset about being dragged into the selection controversy as the call on selection was not hers to take. The Manipuri icon defended her refusal to exchange post-bout pleasantries with Zareen, saying that the former junior world champion will get her respect only if she "herself shows respect to others". The 23-year-old Zareen said she expected better from the senior boxer and felt hurt when her attempt at sharing a hug was rebuffed. PTI
« Back to LIVE