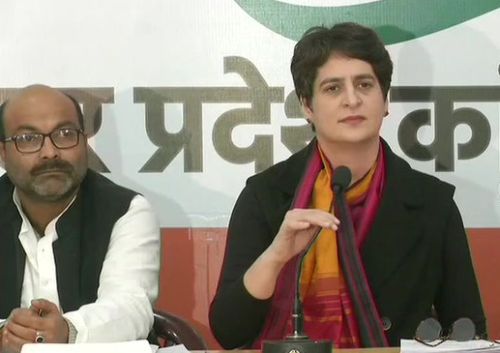 Yogi Adityanath should follow the peacful Hindu dharma symbolised by the saffron robes he wears, Priyanka Gandhi said today as she tore into the Uttar Pradesh CM's controversial vow of "revenge" against violent anti-CAA protesters.
Yogi Adityanath said on December 19 that his government would avenge the destruction of public assets by seizing and auctioning personal property.
"In my opinion, this is perhaps the first time in history that a chief minister has given a statement like this -- that revenge will be taken against the public," Priyanka Gandhi Vadra said at press conference today.
She said the saffron in Yogi Adityanath's clothes didn't belong to him, but to India's religious and spiritual tradition. She said the colour was a symbol of a Hindu dharma that had no place for revenge, violence or enmity -- and asked Yogi Adityanath to follow it.
Priyanka Gandhi has written to Uttar Pradesh Governor Anandiben Patel to ask for a judicial enquiry into the state police's "unlawful conduct" during
protests against the CAA and the NRC.
The police, she wrote, have "run amok throughout the state creating an atmosphere of terror, discrimination, and oppression, thus ensuring that protesters are intimidated into silence and infringing on the....fundamental rights of every citizen of India".
« Back to LIVE