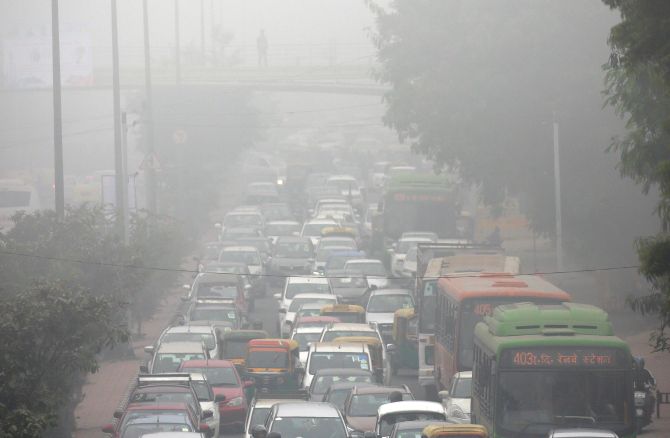 A thick blanket of fog was seen in Delhi and neighbouring cities this morning, leading to disruptions in rail traffic. Airlines have also issued an advisory for passengers taking flights from Indira Gandhi International Airport.
At least 30 trains are running late, officials said.
The air quality in the national capital fell to "severe" category this morning, with the Anand Vihar observatory recording air quality index of 462 and the Okhla Phase-2 centre reporting an AQI of 494.
Poor visibility caused problems for commuters, with many people driving slow on the main roads. "There was heavy fog on the road that connects Delhi and Noida. We had to drive carefully," said Saba Arora, a private firm executive.
At Delhi airport, CAT III B compliant aircraft are currently able to land using instrument landing system or ILS, officials said. The airlines have asked people to stay in touch for updated flight information. Three flights have been diverted so far.
In Delhi, commuters were seen driving with emergency lights on as the visibility on city roads plummeted below 50 metres. "I had a harrowing driving from my home in west Delhi to my workplace," said Aakash Kohli, who works with a media firm in Noida.
According to the weather office, severe cold weather is likely to remain over northern India for two more days.
« Back to LIVE