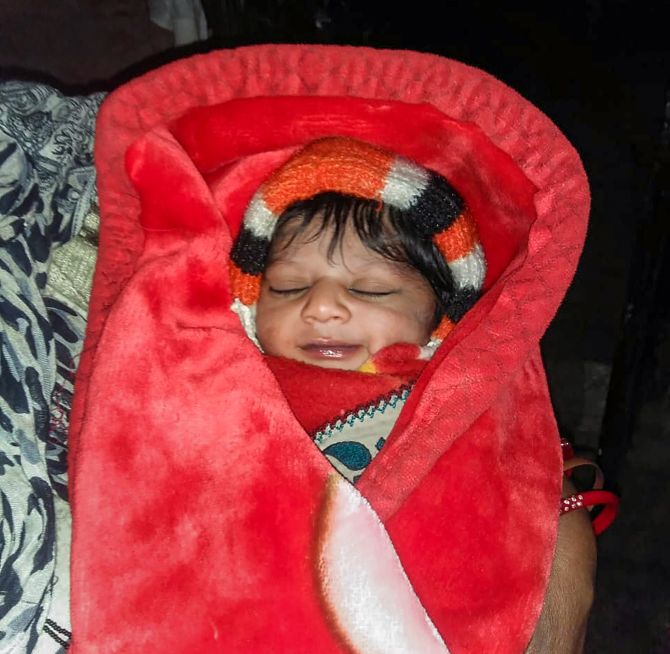 Amid an ongoing row over the amended citizenship law, the Bharatiya Janata Party-led North Delhi Municipal Corporation (NDMC) on Monday handed to the parents the birth certificate of 'Nagrikta', the infant daughter of a Pakistani Hindu family, residing in a resettlement colony in the national capital.
The girl's grandmother, Meera Das, 40, had earlier said the baby was born on December 9, and the family decided to name her 'Nagrikta', anticipating that the Citizenship Amendment Bill (CAB) would be passed by the Rajya Sabha.
'Nagrikta' is the Hindi word for citizenship.
The CAB, now an Act (CAA), was passed by the Lok Sabha on December 11.
"I along with a few NDMC officials went to the family's home in Majnu ka Tila area and handed over the birth certificate to the family of 'Nagrikta'. This is in keeping with the vision of the central government as per the CAA," NDMC's Standing Committee chairperson Jai Prakash said.
The family left their home in Pakistan's Hyderabad and came to India in 2011.
The makeshift tents and unplastered walls with metal roofs in north Delhi's Majnu ka Tila area are home to about 750 Pakistani Hindus who fled the neighbouring country to seek refuge in New Delhi.
Many others live in resettlement colonies in Rohini Sector 9 and 11, Adarsh Nagar and near the Signature Bridge.
The CAA seeks to give Indian nationality to non-Muslim refugees from Pakistan, Bangladesh and Afghanistan who came to India before December 31, 2014, facing religious persecution.
"The message that we wish to send is that any refugee who is eligible to be a citizen of India, we (NDMC) can get civic amenities later. Parents of 'Nagrikta' had requested to get a birth certificate for the daughter.
"So we went to their home only and gave it to her parents. Whatever is possible to do for the people living in camps, we are doing it and will continue to do it," Prakash said.
The CAB when introduced in Parliament had sparked massive violent protests in Assam and demonstrations against the CAA still continue in the state and various other parts of the country.  -- PTI
« Back to LIVE