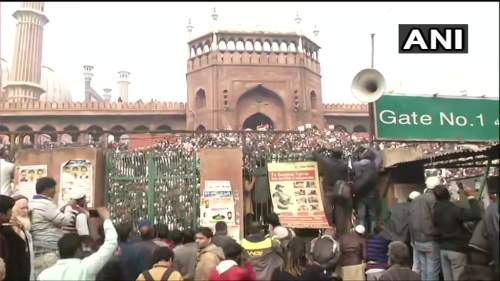 The Bhim Army has begun its protest march from Jama Masjid to Jantar Mantar against the amended citizenship law in spite of prohibitory orders in place in the area. Police are using drones to keep a tab on the law and order situation in the district.
In view of the planned protest, the Delhi Metro Rail Corporation shut Chawri Bazar, Lal Quila and Jama Masjid stations. Delhi Police said that it has denied permission to Bhim Army to take out a protest march from Jama Masjid to Jantar Mantar.
The march is expected to see participation of students from Jawaharlal Nehru University and Jamia Millia Islamia. Joint Commissioner of Police Alok Kumar and Deputy Commissioner of Police Ved Prakash Surya were among senior officers who were present during the flag march in Northeast Delhi.
"We are conducting a flag march in the area to maintain law and order and peace," DCP Surya said. A person identified as Rashid was arrested on Thursday in connection with the violence and vandalism in Seelampur area of the Northeast Delhi which witnessed violent protests by thousands of demonstrators on Tuesday. Prohibitory orders under CrPC Section 144 are in place near the Red Fort area since Thursday.
On Thursday, thousands of students, activists and opposition leaders hit the streets in the national capital, defying heavy security clampdown and prohibitory orders even as authorities suspended mobile internet services and restricted traffic movement to quell the swirling agitation.
Opposition leaders D Raja, Sitaram Yechury, Nilotpal Basu, Brinda Karat, Ajay Maken, Sandeep Dikshit and activists Yogendra Yadav, Umar Khalid were among over 1,200 people detained from areas around Red Fort and Mandi House -- the sites of the two planned demonstrations. -- PTI
« Back to LIVE