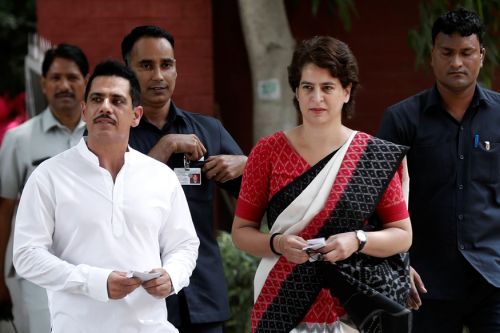 After reports of a massive breach in Congress leader Priyanka Gandhi's security on November 26, her husband Robert Vadra said the security across the country is being compromised with, adding that the safety of every citizen is government's responsibility.
"It is not about the security for Priyanka, my daughter and son or me or the Gandhi family. It's about keeping our citizens especially the women of our country safe and feeling secure," he said in a Facebook post on Tuesday.
On November 26, an SUV car with five passengers allegedly entered Priyanka's residence. The group went up to her and was able get pictures clicked with the Congress leader, the family said. This happened barely weeks after her SPG security cover was downgraded to Z-plus.
"Girls are being molested/raped. What society are we creating? Security of every citizen is the government's responsibility. If we are not safe in our own country, our homes, not safe on roads, not safe in the day or not at night, where and when are we safe?' Vadra further said in the post.
Priyanka, along with brother Rahul and mother Sonia, was an SPG protectee until November 4. The Special Protection Group cover to all three Congress leaders was withdrawn following which they remain Z-plus protectee.
Under the Z-plus security, the family has commandos from the CRPF paramilitary force in close proximity besides guards at their homes and where ever they travel in the country.In comparison, SPG protectees are provided with guards, hi-tech vehicles, jammers and an ambulance in their motorcade. Prime Minister Narendra Modi is now the only SPG protectee in the country.
« Back to LIVE