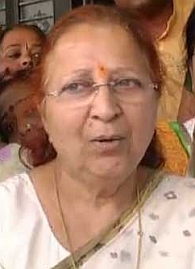 In a candid admission, former Lok Sabha Speaker and ex-Indore BJP MP Sumitra Mahajan said she took the help of Congress leaders for issues concerning the development of her constituency in order to mount pressure on the then Shivraj Singh Chouhan government in the state.
She went on to claim she could not raise issues of public interest several times when her own party's government was in power in MP as she was "tied down by discipline".
The Congress unseated the BJP after 15 years in the assembly polls late last year.
"I could not raise issues of public interest many a times during the previous BJP government in MP. Then, in hush hush manner, I used to tell them (Congress leaders) to raise such issues, promising them I will ask (then) Chief Minister Shivraj Singh Chouhan to do the needful," Mahajan said at a function on Sunday night.
"We rise above party politics when we set forth for Indore's development," the eight-time former MP, who was denied a ticket in the April-May Lok Sabha polls as she had crossed 75 years of age, added.
"I was tied down with (party) discipline so could not publicly speak against the previous state government," she said, adding that Congress leaders kept their word during such times.
-- PTI
« Back to LIVE

The much-anticipated return of international cricket after almost four months was, almost predictably, delayed by rain on Wednesday as the start of England's first Test against the West Indies in Southampton was pushed back. It is 117...

Bajaj Finance was the top laggard in the Sensex pack, tumbling over 4 per cent, followed by Asian Paints, Bajaj Finserv, HCL Tech, Maruti and Infosys. On the other hand, IndusInd Bank, SBI, HUL, Tata Steel and ITC were among the gainers.

The researchers considered projections under three scenarios: 1. Using the current country-specific testing rates and response functions moving forward, 2. If enhanced testing -- of 0.1 per cent a day -- is adopted on July 1, and 3. If...

What are Shahid and Mira celebrating?