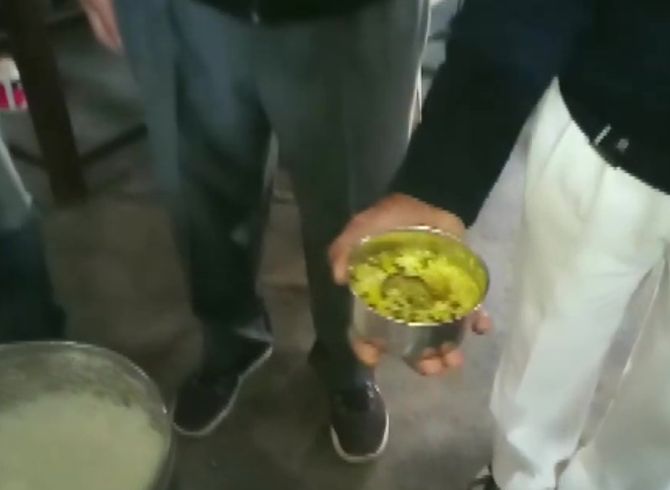 In yet another instance of negligence in midday meal distribution, a dead rat was found in the food served in a school in Muzaffarnagar on Tuesday, following which an inquiry has been ordered by the district administration.
Additional District Magistrate Amit Kumar Singh said that eight students and a teacher of Janata Inter-College in Mustafabad Panchenda village were taken ill and sent to hospital after the rat was found in one of the plates though no one had eaten the food at that time.
NGO Janklyan Samiti of Hapur had supplied the midday meal to the school.
An inquiry has been ordered into the incident and strict action will be taken against those found guilty of negligence, Singh said.
District authorities have ordered lodging of an FIR against the mid-day meal supplier, the official said.
The students and the teacher complained of vomiting after they saw the rat and were taken to hospital, he said.
Last week, another case of apathy had come to light when a video showed that a litre of milk was allegedly diluted with a bucket of water so that 81 children could be served during their midday meal at a government school in Sonbhadra district of Uttar Pradesh, following which a teacher was suspended.
Two months earlier a similar shocking video had emerged from Siyur Primary School in Mirzapur district showing a woman distributing rotis and another giving salt to children in the midday meal.
The National Human Rights Commission (NHRC) had taken note of the Mirzapur incident and sent a notice to the Uttar Pradesh chief secretary following which two teachers were suspended.
According to a NHRC statement, the commission had also sought a detailed report about the status of the midday meal scheme across the state within four weeks.
The state government had lodged an FIR against the journalist who recorded the video of schoolchildren being served salt and roti in their midday meal.   -- PTI
« Back to LIVE