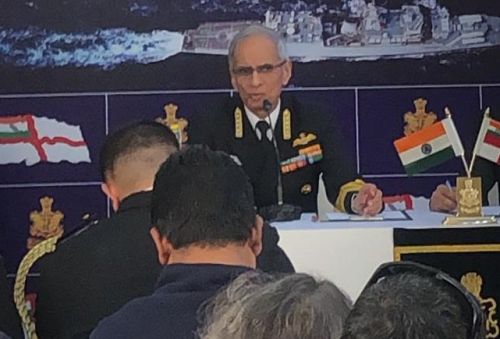 Navy Chief Admiral Karambir Singh on Tuesday said that the force is fully committed to "Make in India" vision and underlined that since December 2018, close to 88 per cent of Indian Navy's contracts and acceptance of necessity (AoN) by value have been concluded with or accorded to Indian vendors.
"Navy is fully committed to 'Make in India' vision. Since December 2018, close to 88 per cent of our contracts and AoN by value have been concluded with or accorded to Indian vendors," he said while addressing the Navy Day press conference in New Delhi.
Highlighting that Navy is at the forefront of self-reliance since independence, the Navy Chief said, "Our commitment to this pursuit is seen by the fact that out of 50 ships and submarines currently under construction, 48 are being built in Indian shipyards. These include the aircraft carrier Vikrant, P-15 bravo class destroyers, P-17 alpha class stealth frigates, Offshore Patrol Vehicles and Scorpene Class submarines.
"The last of P-28 ASW Corvette is scheduled for delivery by next year and the delivery of four P-8I maritime reconnaissance aircraft is scheduled in 2021, informed Admiral Karambir Singh while adding that "we also contracted for 16 ASW shallow watercraft and 36 aircraft which include 12 Dorniers, 16 ALH and 8 Chetak.
"Speaking briefly about various exercises conducted by Indian Navy, he said, "This year, we exercised our composite combat capability through Navy's largest bi-annual war game, that is the theatre level readiness exercise called TROPEX-19. Also as part of TROPEX, we conducted a pan India coastal defence exercise -- Sea Vigil. Based on its effectiveness, the Ministry of Defence (MoD) has also approved institutionalisation of Sea Vigil on a bi-annual basis."
"Indian Navy also participates in numerous regional exercise with friendly foreign countries. From a rather conservative figure of eight exercises in 2015, we are now participating in close to 30 bilateral or multilateral exercises. Maiden bilateral with Bangladesh and Qatar and a trilateral exercise with Singapore and Thailand were also commenced this year. Maiden bilateral exercise with Saudi Arabia is also scheduled early next year," he added.
Speaking about MILAN-2020, the Navy Chief said the event is scheduled to witness the participation of approximately 41 countries. On being asked as to why some of the neighbouring countries, in an apparent reference to China, have not been invited, Navy Chief said, "we have called whom we think are like-minded".Navy Chief Admiral Karambir Singh evaded question on naval exercises with China based on Modi-Xi Jinping informal summit saying "this is beyond my pay grade."
« Back to LIVE