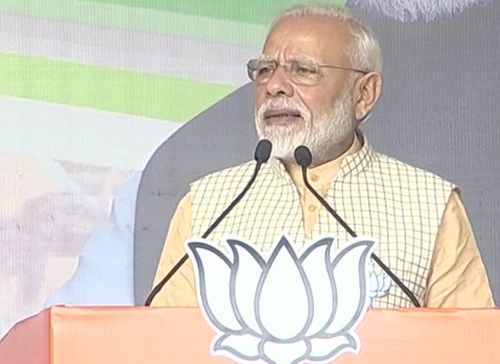 Prime Minister Narendra Modi on Tuesday hailed the BJP government in Jharkhand for breaking the backbone of Naxalism. Addressing a rally in Khunti, Prime Minister Modi said, "After the first phase of the Assembly elections in the state, three things are clear -- the faith of the people of Jharkhand in strengthening democracy and nation building is unprecedented."
He added, "Secondly, the way the BJP government has broken the back of Naxalism, it has reduced the atmosphere of fear and created an environment of development here. Thirdly, it has been made clear that the people of Jharkhand have a feeling of trust towards BJP and the lotus symbol."
Prime Minister Modi said that Jharkhand knows that the politics of Congress and JMM is "politics of deceit and selfishness."
The five-phase elections to the 81-member Jharkhand Assembly began on November 30 and will end on December 20. Counting of votes will take place on December 23.In total, 20 Assembly constituencies are going to polls in the second-phase on December 7. -- ANI
« Back to LIVE