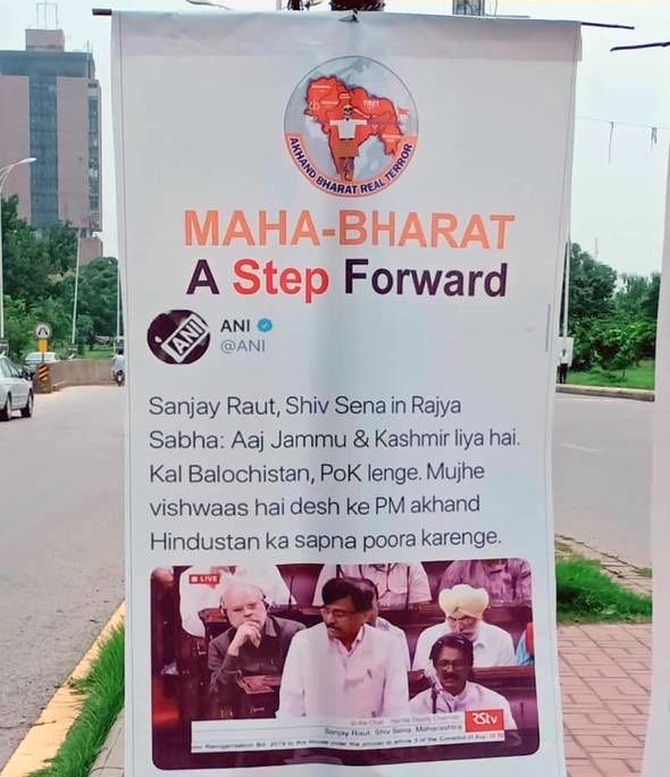 The pro-India banners that appeared in parts of Islamabad hailing the decision on Jammu and Kashmir, were due to an 'error' made by the designers and poor 'language' of the activists, a senior Pakistani official said on Thursday.
On Tuesday, pro-India banners appeared in different parts of the Pakistani capital, including in the high security Red Zone, hailing India's move to revoke the special status of Jammu and Kashmir.
The banners, which appeared on roads in front of Press Club, Sector F-6 and Abpara Chowk, went unnoticed for a long time before some passers-by spotted them and informed police who took down the banners and arrested one person in this connection.
The banners carried a map envisioning 'Akhand Bharat' (undivided India) showing parts of the present-day states of Pakistan, Afghanistan and Bangladesh and warnings about Balochistan.
They carried a message of Shiv Sena leader Sanjay Raut. The caption on the top of the banner read: 'Maha-Bharat A Step Forward'.
'Aaj Jammu & Kashmir liya hai Kal Balochistan, PoK lenge. Mujhe vishwsas hai desh ka PM Akhand Hindustan ka sapna poora karenhe (Today we took Jammu and Kashmir, tomorrow we will take Balochistan and PoK. I am sure Prime Minister Modi will make the dream of undivided India come true),' said the message written on the banners.
The district magistrate, Islamabad, ordered an inquiry into the incident.
On Thursday, Islamabad District Commissioner Hamza Shafqaat tweeted that everybody associated with the issue have been arrested and the investigation was complete.
'Banners investigation completed. Everyone associated arrested, statements recorded. It is mainly an issue of a technical misunderstanding/error by the designer. The intention was to highlight the expansionist/hegemonic aims of India. Our enemies can't dare to take such a step,' he tweeted.
He said during the investigation, it was found that the activists who put up the banners 'were not good at their language'.
"They are actually young activists who need to improve their grammar and punctuation," Shafqaat said.
He said the people who displayed the banner did not seek permission of the Capital Development Authority, the civic body which controls display of banners.
"They did not get any approval. That's why they have been arrested and charged," the district commissioner said.  -- PTI
« Back to LIVE

SEE: How to do tricolour makeup for Independence Day

Priya Sureka, make-up-head at Enrich Salon, shows you how to get your makeup right for Independence Day.

The rapid molecular test is highly accurate and easy to use, making it a prime candidate for use in settings with limited testing capabilities, according to the researchers.