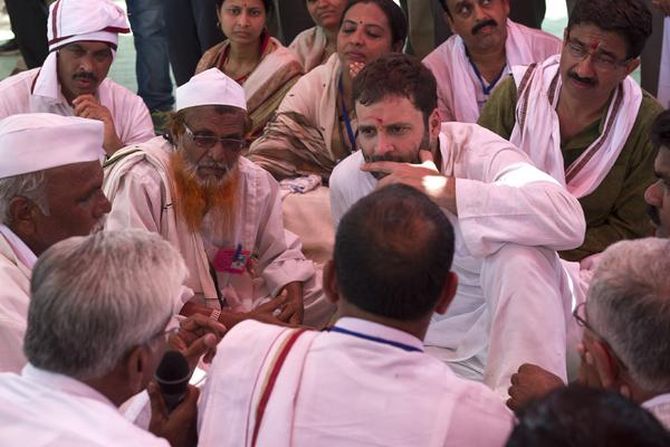 In a veiled attack on the BJP, Congress president Rahul Gandhi Thursday said if his party is voted to power, indebted farmers will not be sent to jails. Addressing an election rally at Dataganj under Aonla parliamentary constituency here, he said, "Businessmen who took loans amounting to thousands of crores were allowed to flee the country instead of sending them to jail. While the farmers who took loans of Rs 20,000 and were unable to pay, were sent to jail. "Now, this will not happen, until and unless the big defaulters are sent to jail, not a single farmer will be sent to jail. As soon as our government is formed, the farmers will not be sent to jail for non-payment of loans," Gandhi asserted.
He said the Congress after forming government in Madhya Pradesh and Rajasthan fulfilled its promise of farm loan waivers. "We will not allow two 'Hindustans' to come up in the country," he said.
Attacking the SP and BSP, the Congress leader said, "Did the SP and BSP ever say 'chowkidar chor hai' (watchman is thief)? No, because their keys are with Modi." Gandhi also hit out at the Modi-led central government for its poor showing in generating employment in the country.
He claimed that unemployment ratio, under the Modi dispensation, was the highest in the last 45 years. "By demonetisation, Modi took away people's money. Now, Congress will snatch the same money and deposit it in the accounts of poor people," he said.
Referring to the minimum income guarantee scheme 'NYAY' proposed by the Congress, Gandhi said, "Once the Congress government is formed, it will ensure an annual income of Rs 72,000. "On one hand, there is 'anyaay' (injustice), while on the other, there is 'nyay' (justice). You have to select between truth and lies," he told the crowd. Congress general secretary and in-charge of western UP Jyotiraditya Scindia was also present on the occasion. -- PTI
Image: Rahul Gandhi with protesting farmers from Vidarbha in 2015
« Back to LIVE