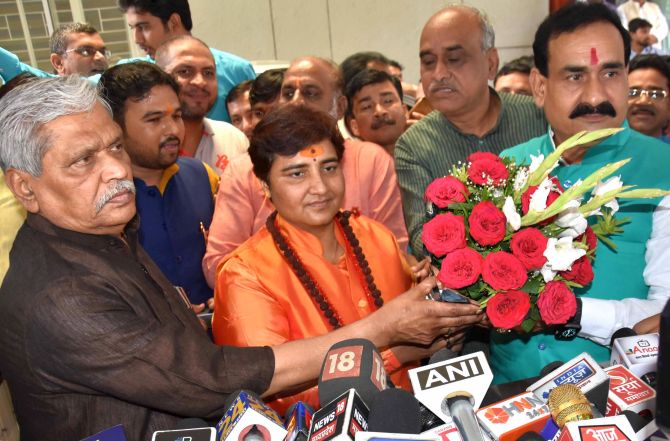 Political activist Tehseen Poonawalla on Thursday urged the Election Commission to debar Bharatiya Janata Party's Bhopal candidate Sadhvi Pragya Singh Thakur from contesting the Lok Sabha polls as she was facing terror charges.
In a letter to the poll body, Poonawalla said the Maharashtra Anti-Terrorism Squad (ATS) had found Thakur to be the 'principal conspirator' in the 2008 Malegaon blast in which six people were killed.
Her name has also cropped up in the Ajmer Dargah blast case, he said.
"I would humbly request the Election Commission of India to take further necessary steps to uphold the Model Code of Conduct 2019 and take appropriate action against Sadhvi Pragya Singh Thakur and debar her from contesting elections," the letter read.
He said in his letter that 'a candidate accused with terror links must not be permitted to contest elections'.
Thakur has spent nine years in jail and is out on bail since 2017 on health grounds and she is currently facing charges under the Unlawful Activities (Prevention) Act, the activist said.
She also stands accused of 'murder, attempt to murder, criminal conspiracy, and of promoting enmity between different groups on ground of religion', Poonawalla, who is known for his proximity with the Congress, said.
However, as per the law, any citizen above 25 years of age is eligible to contest polls unless convicted for any crime that entails punishment for two years or more.
The BJP on Wednesday fielded Thakur from stronghold Bhopal to take on former Madhya Pradesh chief minister and senior Congress leader Digvijay Singh.  -- PTI
« Back to LIVE