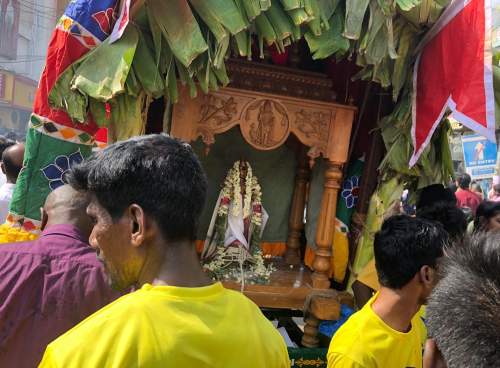 Tamil Nadu recorded 13.48 per cent voting till 9 am Thursday in 38 Lok Sabha constituencies of the state, with Chief Minister K Palaniswami and DMK chief M K Stalin among early voters. In Madurai, the time for voting has been extended by two hours in view of the ongoing Chithirai chariot festival, which marks the grand entry of Lord Kallazhagar into the Vaigai river.
A Ganesh Nadar/Rediff.com reporting from Madurai say the festival gets predominance over voting.
Pic: The image of Lord Kallazhagar makes his way down the streets of Madurai. Courtesy: A Ganesh Nadar.
« Back to LIVE