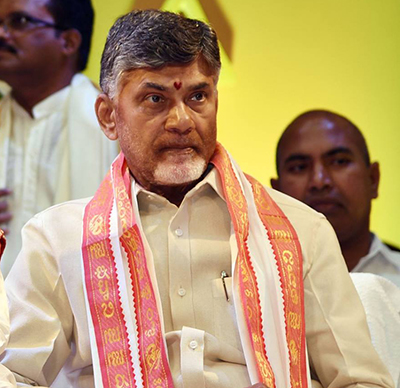 The Election Commission is verifying a complaint by the opposition Yuvajana Shramika Rythu Congress against Chief Minister N Chandrababu Naidu on alleged violation of the model code of conduct.
"We are verifying all facts related to the issue. The MCC is very clear and it will remain in force till May 27 when the entire election process gets over.
"If there is any violation, we will take appropriate action, including against officials concerned," state Chief Electoral Officer Gopal Krishna Dwivedi told reporters in Amaravati, a day after the YSR Congress lodged a complaint against Naidu on alleged violation of the model code of conduct (MCC).
According to official sources, the Chief Minister cancelled a scheduled review meeting on law and order situation Thursday afternoon.
He conducted a review meeting with officials of AP Capital Region Development Authority in the forenoon at the Secretariat, the sources said.
Provision 19.5 of the Model Code of Conduct for Elections strictly bars officials from attending any meeting called by the ministers (including Chief Minister) or political functionaries.
Even security-related briefings 'when considered essential' should be undertaken by the Chief Secretary or the home secretary.
"The rule book is very clear and it has to be scrupulously followed by everyone. Any violation will sure lead to necessary (disciplinary) action," a senior EC official said.
On Wednesday, the chief minister held a review meeting on the progress of Polavaram project, followed by one on drinking water supply in the state.
Principal Secretary (RWS) Jawahar Reddy and other senior officials attended the meetings.
On Thursday, CRDA Commissioner Cherukuri Sridhar and other officials attended the review meeting at the secretariat, according to official sources.  -- PTI
« Back to LIVE