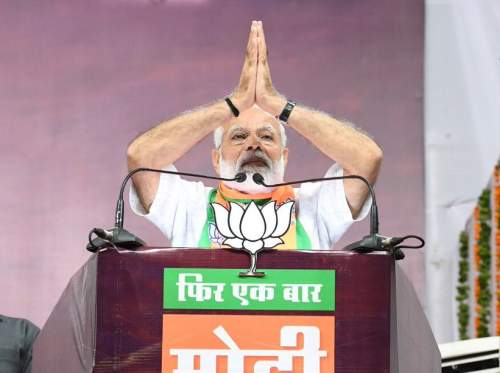 TDP president and Andhra Pradesh Chief Minister N Chandrababu Naidu Friday latched onto veteran BJP leader L K Advani's blog to attack Prime Minister Narendra Modi, saying it was "self first and country last" for him.
"Advani's remarks in the blog reflected his anguish. For him, country came first, party second and self last. It's reverse in the case of Modi. For Modi and (Amit) Shah, it is self first and country last. The ideals of Advani and Atal Bihari Vajpayee no longer have value in the BJP," Naidu, an erstwhile ally of the BJP, said.
In his blog, Advani has said his party has never regarded those who disagreed with it politically as "anti-nationals" or "enemies". Advani's comments assume significance as top BJP leaders, including Modi and BJP president Amit Shah, have been attacking opposition parties with anti-national barbs in the aftermath of the Balakot air strikes.
Addressing a sit-in in front of Ambedkar's statue in Vijayawada and condemning recent Income Tax Department raids on some Telugu Desam Party (TDP), Dravida Munnetra Kazhagam (DMK), Samajwadi Party (SP), Bahujan Samaj Party (BSP), Congress, Janata Dal (Secular) and Aam Aadmi Party (AAP) leaders, Naidu said such raids were being carried out in a planned manner.
He claimed all liberties had vanished under Modi's rule. "It's a fascist regime. Unrest, insecurity and fear have gripped all sections," the TDP chief said, adding that there was a need to protect democracy and the Constitution. Citing I-T raids on some TDP leaders in the last few days, Naidu warned department officials not to act according to the "diktat of the ruling party" in Delhi.
"You will pay a heavy price if you continue with such acts," he warned the officials, even as he maintained that the leaders would cooperate if they acted as per law.
"These raids are a part of the BJP-YSRC-TRS conspiracy against the TDP. They are intended to demoralise our leaders," he said.
In a symbolic gesture, Naidu submitted a memorandum to Ambedkar's statue, denouncing the I-T raids. As a mark of protest, he also released into the air black balloons with pictures of Modi, Telangana Rashtra Samithi president and Chief Minister K Chandrasekhar Rao and YSR Congress (YSRC) chief Jagan Mohan Reddy attached. -- PTI
« Back to LIVE