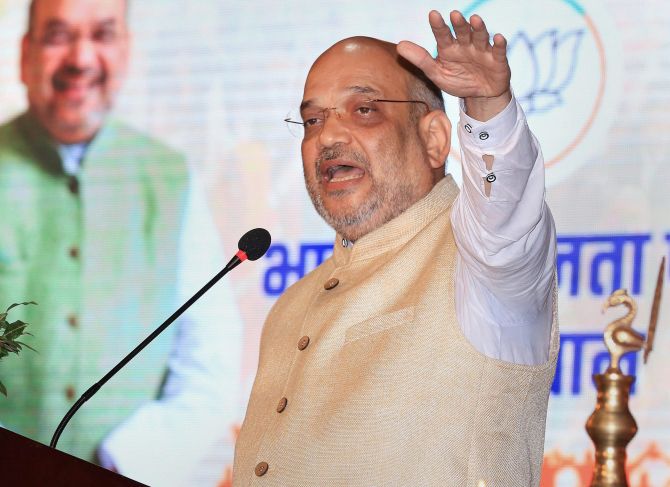 Bharatiya Janata Party president Amit Shah said on Saturday that Bangladeshi migrants are like 'termites' and each one of them will be struck off the electoral roll.
Referring to the draft National Register of Citizens recently published in Assam, he said, "The BJP government brought NRC and prima facie identified nearly 40 lakh illegal immigrants."
The BJP government will pick out each and every 'infiltrator', he said.
"BJP sarkaar ek-ek ghuspaithiye ko chun-chun kar matdata suchi se hatane ka kaam karegi," he said.
Shah was speaking at a public meeting in Sawai Madhopur district's Gangapur before heading for another event in Kota.
The BJP chief was in Rajasthan earlier this month as well as his party and the Congress gear up for the Assembly elections by the year-end.  -- PTI
« Back to LIVE

'I want to explore more than just be a pretty face.'

Ian Chappell feels that Ravichandran Ashwin will certainly be the biggest threat but the Australia batters need to be proactive against him.

B-Town's A-list can always count on the designer to make them feel like royalty when they tie the knot and create a look that will supersede all expectations.

Venkatesh Prasad reserved his best zingers for Pakistan during his playing days.

A glass igloo restaurant in snow covered Gulmarg has become one of the prime tourist attractions in the Kashmir Valley.